Max Richter’s debut album Memoryhouse was originally recorded with the BBC Philharmonic Orchestra in 2002 for the BBC’s Late Junction classical music label. A masterpiece in neoclassical composition, the album has languished in out-of-print obscurity since the dissolution of Late Junction as a label. Indeed, inquisitive listeners might now know Richter better for his earlier collaborations with electronic pioneers The Future Sound of London and Roni Size, as well as his elegiac score to Ari Folman’s 2008 animated documentary Waltz with Bashir.

But Fat Cat Records has plucked Memoryhouse from the doldrums to introduce a new audience to Richter’s first major solo work, and give old fans an excuse to fall under its spell all over again. And what an intoxicating spell it is. A 65-minute journey through the beauty and tragedy of 20th century Europe, Memoryhouse is like an immaculately observed postcard journal, albeit one informed more by imagination than documentary accuracy.

Opening track Europe, After the Rain sets the template for the album’s elegant aesthetic, with a breathy whisper and a crooning violin melody. The track’s central refrain is repeated throughout the album, whether to the toy box electronica of Untitled (Figures) or the baroque harpsichord of Garden (1973)/Interior. The repetition of musical themes set to diverse soundscapes helps to shape the album’s feel as a repository of scattered memories, like a muddled stack of old photographs.

And this vagueness proves to be Memoryhouse’s greatest asset. Whilst some tracks have clearly identifiable reference points, most are left pleasingly open, allowing the listener to fill in the blanks. The thumping, apocalyptic bombast of Last Days might conjure up the sight of WW2 tanks rolling across the French countryside; Sarajevo’s swirling strings might send listeners sprinting down the backstreets of a war-torn city.

Despite the album’s grounding in orchestral music, there’s much for the modern music fan to love here. Richter’s epic, cinematic exploration of sound has echoes in post-rock’s more restrained moments (Mono and Sigur Rós are good touchstones), and even in Beirut’s Eurocentric indie folk.

This collection of evocative vignettes demonstrates why many filmmakers would happily donate a limb to have Richter scoring their movie, but the happy fact is that Memoryhouse will play infinitely better to the stories in your head. 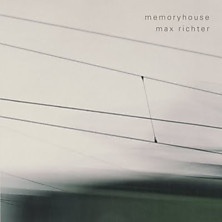