This girl was born to testify.

Soul singers. WHITE soul singers. You can't turn around these days without knocking over a couple. But whereas the Adeles and Duffys spring from the stage school axis, Beth Rowley comes to us with at least a certain amount of dues-paying done. Born to missionary parents in Lima, she's weathered the Bristol music scene, studied under Carleen Anderson and, most importantly, as a schoolgirl provided backing vocals for Ronan Keating and Enrique Iglesias: and that must surely count as about five years-worth of toil in any currency. But joking aside, has Beth really got what it takes to lift herself up above the (very large) crowd?

Firstly, one thing she does have going for her is the the way she handles the gospel blues vein that runs through tracks like Only One Cloud and Almost Persuaded. This girl was born to testify. On Angel Flying Too Close To The Ground she makes the guesting Duke Special sound like an utter wimp. However on You Never Called Me Tonight she can't really manage much more than 'slightly peeved', instead of the anguish that such a song needs.

But it seems harsh to berate someone so young for not being bitter and twisted enough. The real trouble lies, as it so often does, with the production. Too often this album plays it safe, being to scared to alienate any toast-munching Wogan listeners and lacking real punch. A track like So Sublime is so lightweight, floating close to the danger area marked 'Eva Cassidy', that it virtually floats off the CD.

Yet, the bulk of the material - a poppy blues jazz amalgam - is actually fine, being mostly co-written by Ben (son of Roy) Castle; placing her in a more mainstream Jamie Cullum mould. And she handles covers extremely well. Her take on Nobody's Fault But Mine is affecting, though perhaps her reggae version of Dylan's I Shall Be Released is a little too happy for the song's sentiments.

From all reports Rowley can really get down to the nitty gritty on stage, but it doesn't come through enough on this album making it a missed opportunity, but not a hopeless cause. We surely haven't heard the last of Beth Rowley. 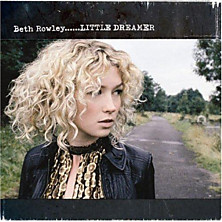