To attract attention in a crowded marketplace, the most common practice is to make a lot of noise. In the music industry, this means as much pre-release hype as possible. It’s long been a predictable process – even the outsider can see that if Band X is being raved about rapturously in January, their June-released record is likely to find favour in those same right places.

Which is why albums like The xx’s debut of last year stand out so brilliantly. It caught the listener unaware without jumping them, creeping into the conscious over the course of several plays. Sure, there was support in the press; but it didn’t shoot into the public sphere immediately, and steady exposure has given it a long life few could have truthfully foreseen. It has, quietly, become something of a modern classic.

Which brings us to Perfume Genius, aka Seattle-based solo artist Mike Hadreas. Learning, his debut album, sounds nothing like the work of The xx, but operates on a similar level of stealth, its slight arrangements – often just piano and Sufjan Stevens-echoing vocals – initially offering little to latch onto, but proving incredibly moving when given the time to sink deep inside. And here they bury their heads, taking refuge from the ills that have informed them. This is a sad record, but one where pain is articulated with an acute beauty that glosses somewhat over emotional cracks, mercifully without such heavy handedness that compelling catharsis can’t take flight.

It is staggeringly sparse and haunting, and immediate replays are regularly required to process further what’s just been heard, to (try to) make sense of a lyric seemingly thrown away in the context of the whole piece. On Mr. Petersen, for example, a song about a teacher Hadreas seems to have had a relationship with: “He made me a tape of Joy Division / He told me there was part of him missing / When I was 16… He jumped off a building.” It’s a shocker, a reveal that is as crushing of image as it is damaged of delivery.

These moments, and there are several, are truly disarming. They are insights so personal that to listen in almost feels wrong. Though deeply melancholic, so sublime are these ten spectral soundtracks to the minutiae of a modern lover’s tribulations that their sorrow is translated into something more uplifting than unsettling. Optimism might seem in short supply, but songs these perfectly formed can’t be crafted without the promise of a little light at the end of the tunnel. 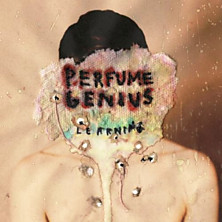