Magpies of the fourth world sign-off with their finest work.

So, this is it then. The final recordings from one of the most unpredictable and frustrating troupes in the history of music. A kind of quasi-mystical mini-movement that, for much of their lenghty career, no one gave two hoots about. A trio of esoteric terrorists – two brothers (Richard and Alan Bishop) and their comrade-in-psalms (Charles Gocher) – who scuppered any chance of reaching beyond their restrictive cultish paradigm by nurturing their inherent trickster nature, wilfully releasing near-unobtainable missives of questionable quality, sabotaging any potentially status-enhancing support slot with mindless comic skits and performance pieces, before occasionally disappearing from the face of the earth on Gnostic sojourns and voyages of questing self-enlightenment.

In fact, it was only when Richard Bishop went solo (knighting himself in the process) and Alan began to curate the endearingly loveable, but highly divisive, Sublime Frequencies imprint, did people really begin to sit up and take any notice. The group’s subsequent contributions to the soundtrack for Harmony Korine’s film Mister Lonely, released in 2007, would see them rein in their more indulgent excesses, fashioning a focused series of bucolic vignettes, implanting themselves in the consciousness of a wider audience. But, cruelly, that year would also see Gocher lose his battle with cancer. Teetering on the precipice of an impossible, largely unsolicited, success, the group found the Persian rug pulled out from underneath them.

Thus, Funeral Mariachi forms the group’s legacy (with the Bishops apparently unwilling to continue using the Sun City Girls name in their friend’s absence) and tribute to the late percussionist. It sees the triumvirate build on the melodic pastures of tranquil minimalism that inhabited Mister Lonely, while feverishly culture-hopping (you can near enough smell the wild aromas kicked up by the souks of Marrakech and the incense emanating from a Burmese Nat Pwe spiritual), borrowing from the remotest outposts of global tradition, without becoming hostages to the overly outlandish. Harnessing those tropes to dexterous finger-picking and chiming Gamelan, along with the often jaw-dropping vocal delivery of Alan Bishop (his bravura performance on The Imam is right up there with his blood-curdling incantatory work on Master Musicians of Bukkake’s People of the Drifting Houses) has resulted in Sun City Girls’ most accessible and consistent album (a far cry from their puzzling and profligate series of Carnival Folklore Resurrection volumes).

In fact, it could just be that all Funeral Mariachi really lacks is a pinch of that seemingly once ubiquitous prankster magic, a final barbed sting in the tail to serve the listener as eternal reminder of this unique unit’s incorrigible, frustrating magnificence. 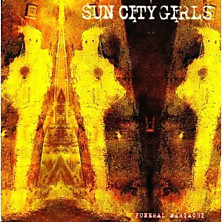