It trades innovation for let-loose fun, and wears its influences proudly.

It might not hang around, the debut long-player from San Diego’s The Soft Pack, but it doesn’t need much time to leave a lasting impression. Ostensibly garage rock – carried by surf-savvy guitars, underpinned by echoes of psychedelia and boisterous of primal percussion – the constituent pieces don’t seem all that special. But the whole far surpasses the sum of its parts.

Formerly known as The Muslims, before the inevitable occurred and the quartet decided to do without their moniker-catalyst for “ignorant and racist” comments, The Soft Pack deliver a series of punchy, quite possibly perishable pop-rockers that might not last beyond this season’s fashions; indeed, this might be last year’s so-hot-right-now, given the months between 2009’s ear-pricking The Muslims and Extinction EPs and today. But, thankfully, one immediately gets the sense that this isn’t coattail-riding fare, that it doesn’t need the oxygen of scene-centric publicity to come alive. And, what with The Drums charting highly in the turn-of-the-year’s regular Ones to Watch furore, they may actually be better placed now for a crack at the mainstream than they’d have been with a debut before the new decade dawned.

Like the buzzy New Yorkers currently attracting blogosphere plaudits like sugary lips do wasps, The Soft Pack’s raucous material is consistently held tightly together by strong melodies, the four exhibiting a pop edge that could see them achieve wider recognition in the long run than select acts they conjure comparisons to: Black Lips, Hot Snakes, The Gun Club, The Modern Lovers. It’s got punk in its DNA, but the genes are all back-to-front; as soon as a number bristling with energy reaches its climax – the aptly titled Flammable – the album slips into a saunter of deliciously downplayed romanticism: Mexico is wonderful, a note-perfect tale of the necessity of letting a loved one go their own way.

Not that The Soft Pack can’t kick out those jams – so forceful are their boots that sometimes no amount of resistance can prevent a toe (at least) tapping vigorously, whatever the situation. Listen at work and don’t be surprised if your colleagues threaten to take a hammer to your knuckles, so frantic will you be desk-drumming to the likes of Move Along and Tides of Time.

Original it isn’t, but it trades innovation for let-loose fun, and wears its influences proudly. The Soft Pack are no chief architects, but they follow blueprints faultlessly. 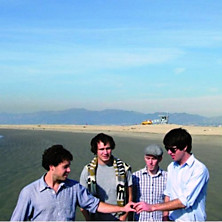