Another splendid set of graceful and gripping instrumentals from the Texan quartet.

Texan quartet Explosions in the Sky have been leading lights of their genre since forming over a decade ago. Crafting songs that, true to the band’s name, burst like collapsing stars in the darkest night (after prolonged and intense build-ups of swirling soundscapes), they’ve become one of post-rock’s archetypal bands. Oddly, given how well their songs have fitted (or perhaps designed) that genre’s template, it’s a term the band would never use themselves. And with Take Care, Take Care, Take Care – their sixth studio album – they certainly move away from the traditional trappings of that genre.

Of course, that’s not to say that these six songs are wildly different in scope to the dramatic instrumental journeys that the band has crafted in the past. They still sound like songs by Explosions in the Sky and, with the record clocking in at over 45 minutes, they’re just as epic as anything in their back catalogue. Yet whereas before songs swelled until they blew open in cacophonous crescendos of blissful, beautiful noise, now, instead of slow-motion momentum to jaw-dropping climaxes, these songs are a continual denouement. They ebb and flow with grace and determination from the offset.

Early on, Last Known Surroundings settles into a hypnotic cadence that’s powerful yet understated, repetitive yet exciting. Rather than increase in intensity, it’s a constant, mesmerising pulse that grabs you right from the start. Although only three-and-a-half minutes long, Trembling Hands is equally enthralling; the sound of the universe expanding infinitely. Postcard from 1952 and the tumbling, trembling finale of Let Me Back In both sound like they’ve existed in the atmosphere for centuries, appearing like distant galaxies that have just been waiting to be discovered.

Ultimately, though, to break down this collection into tracks and songs does it a disservice – really, it’s just one eye-opening surge of splendour, like the first gasp of a newborn baby taking in the world for the very first time. The difference with this album: that sense of wonder never fades. 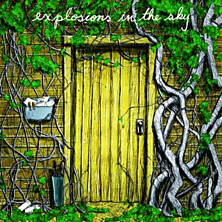