Jimmy Smith Back At The Chicken Shack/Midnight Special Review

An opportunity for these well loved gems to sparkle a little brighter once more in the...

The recently-departed Jimmy Smith, originator of the 'soul jazz' Hammond Organ genre, was such a spectacular success for Blue Note at the time of these recordings that label founder Alfred Lion admitted years later that the profits from Smith’s hits kept the company afloat for an extended period. Lion also once jokingly told his wife that he often considered selling off Blue Note around this time - just so he could become Smith’s tour manager; ‘that way,’ he explained, ‘I could get to watch him play every day’.

Smith himself was equally enjoying this prolific and bankable run, no doubt due to the timeless and quality music he was recording at this point. He was mostly teamed up with label mates like guitarist Kenny Burrell and saxophonist Stanley Turrentine, both well grounded in the greasy strain of 'down home' jazz that these two albums typify. This was the sound of urban black America at the time; every nightlife area from New Orleans to Chicago was dotted with 'organ lounges' where the plethora of Smith-inspired followers like Jack McDuff, Jimmy McGriff and a thousand more obscure jazz organ groups plied their swinging trade for the next decade and a half.

Recorded back to back at Rudy Van Gelder’s New Jersey studio in April 1960, both of these albums are equally infected with the bubbling, swinging pulse of Smith's comprehensive organ technique. It’s all here: the murmuring, accompanying chords punctuated with his trade mark dextrous right hand fills, riffs and runs, all this underpinned by the thumping bass lines generated by a combination of Smith's left hand on the Hammond's lower keyboard.

We get to hear this veritable one-man jazz band backed by the aforementioned jazz greats and Smith's long-time drummer Donald Bailey. They all lock into their inimitable groove right across Back At The Chicken Shack and Midnight Special and both come out as genre-defining recordings, Turrentine's gospel like yelps on the sax acting as the perfect foil to Smith and Baileys Baptist-infused rhythmic drive.

A particular highlight for Turrentine is his self-penned “Minor Chant”. Meanwhile Burrell’s precise and swinging chord voicings leap into the spaces between Smith's throaty organ barks and Bailey’s driving pulse with fantastic effect on “Jumpin' The Blues”, before Kenny takes us through one of his delightful, well-constructed solos - swinging and highly energetic but tastefully executed. In addition, Smith's use of subtle dynamics when backing a soloist shines, something exemplified by his deft touch throughout but particularly on “Why Was I Born”.

Both these recordings have been re-issued previously, but the inclusion of two unreleased tracks and the fact that Rudy Van Gelder’s golden ears have been afforded the chance to re-polish his original work allow these well loved gems to sparkle a little brighter once more in the digital age. 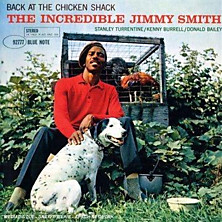