An album uncertain of its direction, from a band making the journey very interesting.

"It’s been 15 or 16 years since the last truly classic album, but I think we’ve done it," Serge Pizzorno claims of Velociraptor!, which is exactly the kind of bullish boasting which, along with their boorish interviews and boozy gang attitude, have made it easy to pigeonhole Kasabian as the Leicestershire Oasis. This is unfortunate, as their actual music has always been much more interesting and eclectic. From the start, their ease with club beats and electronica suggested that – unlike the Gallaghers – they had some awareness of which decade they were in. And while Oasis became duller and more conservative with each new record, Kasabian have – so far – grown more adventurous.

June’s teaser single, Switchblade Smiles, certainly suggested that Velociraptor! would take up where 2009’s West Ryder Pauper Lunatic Asylum left off – completely out there, and completely off its face. A remarkably uncompromising opening salvo, it begins as a dreamily buzzing Eastern mantra, before a dinosaur-sized dance beat crashes in and the song spends the next few minutes zig-zagging wildly between club stomper and blissed-out space rock.

Fortunately for fans fearing Kasabian have completely left Planet Rock, the rest of the album plays it safer, shifting restlessly between growling garage and psychedelic reveries. Days Are Forgotten is built on a filthy delta blues riff, and boasts a trademark vowel-murdering, stadium-shaking chorus. For sheer catchiness, it’s only rivalled by the splendidly silly title-track, with its grimy guitars, absurd lyrics and air-punching chorus. Festival-goers should learn the words "Velociraptor / He gonna find ya / He gonna kill ya / He gonna eat ya" now: you’ll be hearing them a lot next year.

Of the slower songs, the meandering Acid Turkish Bath (Shelter from the Storm) revisits the Eastern influences of Switchblade Smiles but dredges up unpleasant memories of Kula Shaker, while Goodbye Kiss is agreeable but unremarkable, sounding like a cast-off from Alex Turner’s understated Submarine soundtrack. Far, far lovelier is the closing Neon Noon, a reverb-drenched slow-burner which intertwines analogue electro, acoustic guitars, sighing strings and a subdued, mournful melody. It may be the first genuinely moving Kasabian song, a truly welcome new development.

Velociraptor! is neither the classic Pizzorno insists it is, nor the numbskull stadium rock cynics will presume it is. It sounds like a band still uncertain of exactly where they want to be, but determined to make the way there interesting. 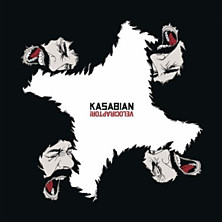