He may have retained his fierce integrity and insightful intelligence, but perhaps...

Forget Lennon. Forget Morrissey. Forget Roger Waters, Jarvis Cocker and all the other gifted wordsmiths to have graced British popular music over the past five decades. In the humble opinion of this particular writer, the finest lyricist this country has yet produced is the Bard of Barking himself – Stephen William Bragg. Right, that's the hyperbole over and done with. The question is, at the age of 50 and with his first new offering in six years, does Billy still have what it takes to live up to such lofty praise? Or has a steady onset of middle-aged contentment, political mellowing and history documentaries robbed him of his mojo?

Well, by the standards of most artists, Mr Love And Justice is not at all bad, but compared to Bragg's own Talking With The Taxman About Poetry or Worker's Playtime it doesn't fare at all well. That heartfelt bellow of a voice is still as distinctive as ever, and he's still capable of delightful couplets like M For Me's ''I've got friends who are telling me they're living in clover, but lose the c for commitment and the l for love and it's over baby''.

Unfortunately, after a few listens, however much you want to like this album, the realisation dawns that the songs just aren't very memorable. With no Conservative government left to fight, Bragg gamely turns his attention to new targets such as the tobacco industry (Johnny Carcinogenic), the arrest and detention of terror suspects (O Freedom), and, bizarrely, the under-use of Britain's beaches (The Beach Is Free).

Every subject is as thoughtfully and wittily examined as you'd expect, but the problem is, the tunes just aren't up to scratch. Most of them sound, well, like other Billy Bragg songs, only not as good. One chord progression on the title track is completely indistinguishable from Don't Try This At Home's Wish You Were Her, which was comfortably the worst song on that album anyway, and elsewhere the musical accompaniment on Mr Love And Justice is polite, mannered and frankly, rather dull.

Is it a coincidence that Bragg's last great record (the aforementioned Don't Try This At Home) was released in the same year (1991) that its creator's nemesis, Margaret Thatcher, was ousted from power, signalling the beginning of the end for her party's rule? Since then, Billy has slowly but surely become part of the establishment, debating the reform of the House of Lords on parliamentary committees, writing books on English identity and joining super groups like the Imagined Village. He may have retained his fierce integrity and insightful intelligence, but perhaps inevitably the anger has gone, to the detriment of his music.

The egregious critic Garry Bushell may have been unduly harsh in describing the singer as ''pontificating on a South London council estate when we all know he lives in a lovely big house in West Dorset'', but perhaps he had a point. 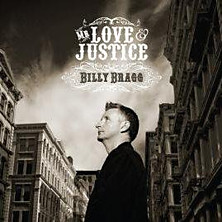