Three musicians not taking themselves seriously, but taking their music very much so

The Cave Singers' Invitation Songs was one of the most memorable alt-country albums of 2007. If this Seattle-based three piece's debut was a black-and-white print of the movie Deliverance, Welcome Joy is the sequel, in not-quite-full colour.

Sepia tones are never far from the wide screen of their strangely compelling songs, though there’s more warmth and assurance this time around. But while they seem to have loosened up and got more comfortable with each other, they haven't lost their edge by any means.

Lead singer Pete Quirk (harmonica, melodica, guitar) has the tone and cocksure sneer of The Violent Femmes' Gordon Gano, but also more than a touch of Marc Bolan’s whimsical whinny and playfully musical treatment of lyrics. And bandmates Derek Fudesco (guitar, bass pedals) and Marty Lund (drums, guitar) are much more than simply backing musicians: together, they make music like a true trio.

Judging by their debut, you might not have guessed that this Seattle band was formed from the ashes of three disbanded hardcore/post-punk bands. But the aggressive guitar sound of At the Cut now makes that clearer.

The poppy, rhythmic rush of I Don't Mind will give fans of Creedence Clearwater Revival's Proud Mary a wry smile. And the joy of the title is obvious in the relaxed ease and carefree picking of Summer Light (“We don’t care where we are / We don’t care if we arrive soon”), the galloping snare of Leap and the optimistic uplift of Beach House, possibly the most accessible piece here. It's just a bit strange that things peter out with the inconclusive understatement of Bramble.

There’s more attention to detail (particularly with regard to the backing vocals) and more variety in the arrangements than was apparent on their debut, making Welcome Joy the sound of three musicians not taking themselves seriously but taking their music very much so, which can only be a good thing. And, most importantly, these still sound very much like 'Cave songs'. 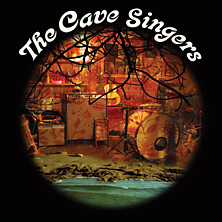