We are certainly in the presence of a mighty talent.

There’s something alluringly familiar about Krystle Warren. She instantly sounds classic, like a highly-regarded veteran delivering her latest opus with the assurance that usually only accompanies someone with a formidable back catalogue. It’s something of a shock, then, to register that this articulate, commanding set is her debut album.

Much of its strength is down to the assured quality of her voice, which sashays elegantly among the hidden corridors linking jazz, blues, folk, funk and pop without a trace of self-consciousness and has you instinctively grasping for elusive comparisons. Tracy Chapman, Nina Simone, Joan Armatrading, Norah Jones, Madeleine Peyroux and Erykah Badu spring lazily to mind, but Warren has a distinctively forthright style of her own that carries her through the album’s occasionally confusing maze of eclecticism.

Originally from Kansas City, she served her apprenticeship busking in New York and Paris, acquiring a grit that undercuts this entire album, emphasising the strength of a musical personality that sears through the occasionally over-sophisticated arrangements, which are presumably designed to soften her edges but are in danger of reducing her to the level of wine bar background music. This is an affront to a singular talent and isn’t necessary – as she proves when she croons seductively on Some Trivial Pursuit over tinkling keyboards and lightly brushed drum strokes, effortlessly exudes feel-good charm on Yuletide Carol and quietly breaks your heart with the subtly emotional title track.

She’s equally impressive on the more difficult stuff. She brings real soul to The Means to Be, which grows swiftly and dramatically from stark beginnings into an epic tour de force complete with an oddly avant-garde climax; and gracefully transports the intricate To the Middle from its complex, jazzy underbelly. She has an observational way with lyrics, too; plenty of vivid imagery decorates her vignettes of urban life to depict the perils of love, loneliness and life. It sounds melancholy – and often is – but there’s an irresistible sparkle here and her spirit of restlessness suggests that while this album may sometimes sound too polite for comfort, we are certainly in the presence of a mighty talent. 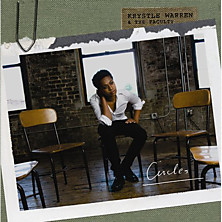