...an essential item for any serious soundtrack collection.

In the 60s and 70s, programmes like Fireball Xl5, Thunderbirds, Stingray and Joe 90 had kids all over the country in their grip. While we knew Steve Zodiac, Troy Tempest and the Tracy family were all, well, puppets, for a precious half hour a week we were enthralled as they cheated death in the face of overwhelming odds.

Though there were enough explosions and fantastic looking vehicles on display to keep the average eight year old happy, much of the power of Gerry Anderson's creations was provided by Barry Gray's memorable scores. Stirring and spooky by turn, they provided enough dramatic tension to make that all important suspension of disbelief possible.

Captain Scarlet was a change in tone for Anderson. Much darker than its predecessors it featured lots of deaths (often quite grisly) and a malevolent alien force who spoke with a very scary voice. The puppets were more realistic, and there were no laughs. Gray's incidental music reflected this (and would continue to so on the even darker, live action U.F.O); dissonant vibraphone chords shimmer under hovering, tremulous strings contrasted with urgent, militaristic drums and pulsing brass - driving the action ever onto its climax (and, no doubt, a big explosion).

This CD collects all the scores Gray made for the series, along with the superb theme tune, a few stings and an ice cream commercial. There's some classic cheesy space pop, complete with Joe Meek-ish electronic noises and robot vocal refrain; an Ondes Martenot provides some cosmic swoops on the incidental music, there's even a hint of Martin Denny in Gray's latin/exotica excursions.

The sleeve notes offer a wealth of information (down to the lengths of the recording sessions) and their author (and album co-producer), Ralph Titterton, is admirably obsessive in his approach. He and his associates have done themselves proud, producing an essential item for any serious soundtrack collection. S.I.G! 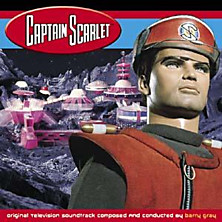