Coope, Boyes & Simpson As If… Review

Offers music that is rich and deep and rousing in its familiarity.

Barry Coope, Jim Boyes and Lester Simpson are masters of close-harmony vocal work — the rather technical definition which describes the kind of heart-stirring group singing that has been one of the most recognisable characteristics of the English folk tradition. They have sung with the Waterson-Carthy clan, and with the National Theatre, as well as releasing their own recordings in the near-20 years of their career as a trio.

As If… is their first record for five years and it shows the measure of their talent — running from covers such as Robert Burns’ The Slave’s Lament to the deep, steady sadness of Clive James and Pete Atkins’ A Hill of Little Shoes (sample lyric: “and every little shoe’s a foot that never grew another day”) to a closing answer to The Who’s Won’t Get Fooled Again (says Simpson: “They inspired me when I was at school, but now I have a more realistic view of the world”).

There is further new material here, too, and it is this which proves the most intriguing — the politically-charged Under a Stone and the satirical twinge of The Emperor’s New Clothes, to the close, warm, gentleness of Simpson’s composition, Haven. Even on the newer tracks, As If… offers music that is rich and deep and rousing in its familiarity. 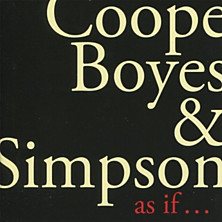