The greatest hip hop album of the 21st century.

Imagine the hip hop of today without the influence of OutKast’s fourth album. No Stankonia: quite possibly no Frank Ocean, no Janelle Monáe, no Shabazz Palaces; no southern playas taking the four elements from New York to outer space via the suburbs of the ATL. How boring.

While Stankonia wasn’t the first taste of this dynamic duo’s inspired interpretations of rap – schizophrenic pieces that tapped funk up for its number before forgetting to call it back; snapping trap-rap rockers unleashed before the world caught up with the parlance – it was the most perfect distillation of everything that’d come before it.

Immediate long-play predecessor, 1998’s Aquemini, was a plaudit-magnet in its own right; a platinum-seller which piqued significant domestic interest yet didn’t translate to a global audience.

But with the new millennium came new opportunities for partners-in-rhyme André 3000 and Big Boi: Stankonia is the sound of every cracked-open door being kicked off its hinges.

Before Stankonia came B.O.B – an unusual lead-single selection given its ménage-a-trois of jitterbug drum’n’bass, gospel backing vocals and a virtuosic instrumental sensibility owing much to Sly Stone and Hendrix. The single was no commercial high-flyer, but set a tone that its parent LP would adroitly adhere to: anything goes, so long as it flows.

And flow Stankonia had to, brilliantly, because for the second consecutive set its makers pushed CD capacity, filling a 74-minute run-time.

Amongst its 24 tracks are skippable skits, although these add contextual colour to the album’s singular bravado, but for the most part Stankonia serves the album format, rather than the other way around. Its sequencing, its pacing, these are perfect; transitions from casual vocabulary to lightning verses, electrifying.

Time has painted some cuts as relative filler: the booty-clap bounce of We Luv Deez Hoez and fizzy meditation on carnal etiquette I’ll Call Before I Come are shallower of emotional depth than the still-exquisite Ms Jackson and the (Sign “O” the Times-period) Prince-recalling Toilet Tisha. It was Ms Jackson that cracked the UK for these ATLiens, charting at two.

That remains their highest position to date, one better than the evergreen Hey Ya! achieved. With no OutKast LP since 2006’s Idlewild, it’s unclear if they’ll ever match its chart impact.

But if Stankonia forever remains this outfit’s ultimate record, it’s some achievement to call the greatest hip hop album of the 21st century one of your own. 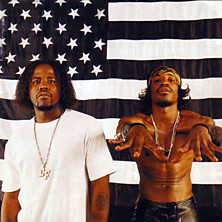