The Stones may no longer be churning out hits but they still know how to mount a...

Your reaction to this live double album will depend on whether you see the Stones as gnarled has-beens or the greatest of all rock 'n' roll institutions. To the ardent fan, Live Licks is an essential document of their 2002/03 world tour, taking in everything from classic singles to covers and recent album tracks. But even for cynics it demonstrates how potent they remain as a live act, despite not frightening the horses as much these days.

Over three million people worldwide saw the 'Licks' tour, making it the second-highest grossing of all time, and on the strength of the first disc here it's easy to see why they're still packing them in. Old favourites like "Street Fighting Man" burst forth like sheet lightning, while "Paint It, Black" and "Neighbours" are so tight and sinewy that it's easy to believe the Stones get more skilled at performing with each passing tour.

Less famous numbers are still presented with undeniable showmanship, the effortless skank of "You Don't Have To Mean It" (from 1997's Bridges To Babylon) providing an unexpectedly sweet interlude on disc two. For the most part these aren't radical reworkings, although the omnipresent parping horns and hammering keys at times mean the sound approaches showband-esque sameyness, and a couple of tracks are marred by hamfisted editing.

More troubling is the self-censorship evident some older tracks. "Brown Sugar" is a bracing, sax-laden strut, but is shorn of its more provocative lyrical images of slavery and violence. Even the apocalyptic rumble of the original "Gimme Shelter" is transformed into something altogether more breezy and business-like, its chilling refrain of 'Rape, murder!' delivered with strangulated embarrassment.

It's telling that the unlovely album cover, depicting a girl straddling the band's tongue-and-lips logo, sells in both topless and 'clean' versions out of deference to the New Puritanism of 2004. With this incipient reluctance to shock, you may wonder what happened to the Rolling Stones of yore who urinated on petrol stations and outraged the establishment with the frank sexuality of "Let's Spend The Night Together".

Like Bowie, the Stones may no longer be churning out hits but they still know how to mount a spectacle, as this release amply proves. The blues legends they once aped performed as long as they were mobile, so why should Sir Mick and the boys be expected to throw in the towel early? 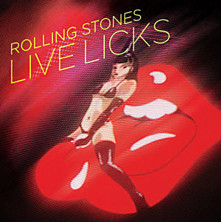