Bella is Teddy Thompson's fifth album, and the hope this time must be that it will stir the kind of commercial success that his particular kind of finely-honed melodic folk-pop surely warrants. After all, a man cannot live by critical acclaim alone.

And so the controls seem to have been firmly set for the heart of the daytime radio mainstream. At times the mood here seems in danger of growing over-buoyant – opener Looking for a Girl, in which our hero lists the qualities of his ideal woman (with, one hopes, one eyebrow raised) is so radio-friendly it could veer into Shania Twain territory, were it not tempered by a rather gutsy guitar solo.

But the songs here have an essential warmth that it is hard to resist; they have a heart and a drive to them as they examine the dog-eared topic of love – the want of it, the lack of it, the glimpse of it. He's perhaps at his best on the delicate tale of Delilah, or as a spatting lover on Tell Me What You Want – a duet with Jenni Muldaur, in which their warring voices end in a pleasing tangle.

Much of the appeal here lies in Thompson's voice, a rich, heated thing, capable of firing up even the simplest lyric – as well as reaching a sweet, soaring falsetto on numbers such as the sumptuous Take Me Back Again. The other delight, as on Thompson's previous albums, is his spirit of great musical adventure – there's folk, of course (as the son of Linda and Richard Thompson, one would expect no less), but also a keen pop ear, an evident love for the pace of 50s and 60s tunes, for tones that could have been stolen from the hands of Roy Orbison.

You can't help but feel that Teddy Thompson is a man who knows how to build a song. Every one of the 11 tracks here feels impeccably structured, plotted, weighted, watertight. But there is a delight here too, the sheer pleasure of sploshing about in the musical depths, that brings a heart-winning charm to this record. 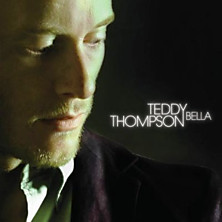