Confirms that Simpson remains at the top of his game.

One of the most impressive things about Martin Simpson’s Indian summer is his willingness to keep ringing the changes and refuse to settle for a winning formula. Decorated with awards for his previous two albums, Prodigal Son and True Stories – both of which broke new ground for him and were, in their own ways, strikingly different – the great guitar and banjo stylist moves on again.

In many ways this is a risky, maybe even foolhardy project. Anyone who invites singers of the calibre of Dick Gaughan, June Tabor and Fay Hield to not only contribute, but take lead vocals (respectively on Jamie Foyers, Strange Affair and Bad Girl’s Lament) is taking a serious gamble. Even one fleeting cameo from Tabor alone will usually find her walking off with all the plaudits.

Simpson, a Tabor collaborator of old, is justly acclaimed for his guitar arrangements. He clearly takes as much joy and pride in playing his sensitive accompaniments as he does simply sitting in the middle of a roaring band cooking up belting versions of Little Liza Jane and a Cajun take on Lakes of Pontchartrain.

Simpson’s love of banjo is prevalent throughout (he plays the late Mike Waterson’s restored old instrument on Don’t Leave Your Banjo in the Shed Mr Waterson), while the great pedal steel player BJ Cole and accordion maestro Andy Cutting are also prominent. Curve balls include a terrific duet with Gaughan on Brother Can You Spare a Dime and a stirring version of Bruce Springsteen’s Brothers Under the Bridge, including a short burst of Richard Thompson on electric guitar.

There are a couple of big solo tracks, Bold General Wolfe and Barbry Allen – Simpson’s lovely slide guitar lifting the gloom of one of the most hackneyed songs in the folk firmament – while the album’s fluctuating moods are underlined by an unusually mournful treatment of In the Pines. In complete contrast, Simpson’s only original song in the set, Banjo Bill, is a lovely tribute to a relatively obscure Kentucky mountain musician Bill Cornett.

An album of great love and joy, Purpose + Grace confirms that Simpson remains at the top of his game. 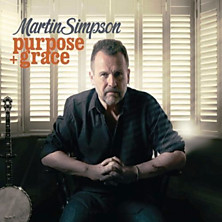