Boards of Canada Music Has the Right to Children Review

Boards of Canada’s breakthrough is a piece of vital electronica history.

Music Has the Right to Children is the moment when Boards of Canada – Scottish brothers Marcus Eoin and Mike Sandison – stepped free of the electronic underground and began their relationship with wider audiences.

The 1998 album wasn’t the duo’s first – 1996’s Boc Maxima, a super-limited release through their own Music70 label, ran to over 60 minutes. But it saw such a restricted physical run that Music Has… is deemed the group’s de facto debut.

Boc Maxima and its surrounding EPs, 1995’s Twoism and 1996’s Hi Scores, heavily inform this 17-tracker (expanded to 18 on subsequent reissues). Music Has… features no shortage of older material brought up to date – Smokes Quantity first appeared on Twoism.

But Music Has… is better than a mere summary-to-date of Boards of Canada’s music. It works as a brilliant album in its own right, past work reshaped to suit the pair’s (then) present creative mindsets. It doesn’t hurry its way through an hour-plus run time, but never does a track outstay its welcome.

These are deliciously down-tempo arrangements, which, when allowed to stretch to six minutes (An Eagle in Your Mind, Pete Standing Alone), lock the listener into a deep and fantastical daydream.

Appealingly analogue tones caress clinical circuit-board beats; vocal samples slip between bars, beckoning one to journey deeper into the mix. At its most enveloping – Turquoise Hexagon Sun is a chiming delight; Open the Light an ambient amalgam of twinkles and drones – one may hope the dream never ends.

Music Has… occasionally shows its age, exhibiting a handful of trite trip-hop motifs. These skittering, scratchy moments, like the jittery turntables of Sixtyten, are still very accomplished affairs. But they don’t transcend the era of their inception.

Overall, though, Music Has… is a vital piece of electronica history. Its makers sat easily beside Warp stable-mates Squarepusher and Aphex Twin on cursory evaluation; but their approach has always been more oddball than most peers.

A critical hit – nostalgic and at one with nature, yet resolutely future-facing – Music Has… set the scene for Boards of Canada’s later successes. 2002’s Geogaddi reached 21 on the UK album chart, a tremendous result for music that, in the grand scheme, orbits planet pop at a considerable distance. 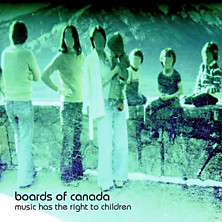