When you’re hot you're hot. With Poor Man's Heaven, the man who would be folkie cross-over king is certainly giving off a lot of heat. The instrumental palette may be largely the same as 2006's Freedom Fields but the reach is bigger and you can hear an ambitious stadium-sized appetite rattling around in the fusillades of up-front drumming which open the album. Such is the rock and reel quotient present, there are moments where you could imagine Jimmy Page and Robert Plant coming up with some of this stuff; the thundering pattern utilised on The Hurlers bears a passing resemblance to the flurry of energy sizzling between the guitar and drums of Led Zep's Four Sticks.

With a cover that has him alongside a rocky shoreline there's no great surprise that nautical themes and imagery ripple through many of the lyrics, and none more dramatically than on Solomon Browne. Here the Penlee lifeboat disaster, in which 16 lives were lost, is recounted in much the way it might have been had the tragedy occurred in 1881 instead of 1981. Aping the kind of stoic reportage of catastrophic events that was the bread and butter of traditional folk music has worked well for Lakeman, enabling him to blend contemporary events with an old-world patina like a stylistic camouflage. You can never be sure if the song you're listening to wasn't handed down through the generations or has just been whipped off the hard-drive.

Throughout the album Ben Nichols' acoustic growls like a predatory beast, pouncing and gnawing at the bones of songs such as I'll Haunt You and the ebullient banjo-fiddle driven, Race To Be King and most spectacularly in the spine-tingling runs and slides of Greed and Gold. Pentangle's Danny Thompson himself would be proud to turn in work of this calibre.

His song writing continues the gold-yielding formula of its predecessor with energetic strumalongs, voracious fiddles and a sparkling delivery that'll do nothing to diminish his rising star; folk music for people who don't want to stick their finger in their ear or don the Arran Isle sweater just yet. 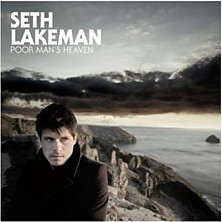