Disappointing, but not catastrophic as to the CD's overall likeability.

Rich, deep, warm and supremely beautiful are all appropriate descriptions of the fabled Berlin Philharmonic Sound, and Simon Rattle's tenure with this Rolls Royce of orchestras hasn't diluted it in any way, despite what a small band of German music critics would have us believe. This sound is the orchestra's trump card when performing its core repertoire of 19th-century German music, but can be its undoing for much of the crisp French, or early, or 20th century music Rattle enjoys conducting. The idea, then, of them performing Berlioz's Symphonie Fantastique sets alarm bells ringing. Can they do it? Well, their performance doesn't have the glorious technicoloured brightness of Roger Norrington's period recording with the London Classical Players. However, if you like your orchestras rich and creamy then you'll be amply content with it, particularly as the equally-creamy-voiced mezzo soprano, Susan Graham, rounds off the disc with Berlioz's dramatic cantata, La Mort de Cléopâtre.

Few symphonies can boast such a colourful genesis as the ''Fantastique''. It was inspired by Berlioz's unrequited love for the English Shakespearean actress Harriet Smithson, and it blew apart symphonic conventions of the time with its programmatic structure, drawn heavily from the operatic world. It tells the story of a lovesick artist (Berlioz) who takes an overdose of opium to relieve his suffering. Rather than killing him, it triggers a wild, hallucinatory dream, made up of a series of episodes concerning the tormented relationship. Rattle and the orchestra hold Berlioz's dramatic thread throughout the symphony. They also have a keen sense of the music’s operatic qualities and milk them to their full potential, e.g. in the March To The Scaffold. Asking this band to play raucously is a bit like asking a politician to give a ''yes or no'' answer, and consequently the demonic witches' dance is a bit nice in places, as if the hags hadn't had their Weetabix that morning. Disappointing, but not catastrophic as to the CD's overall likeability. 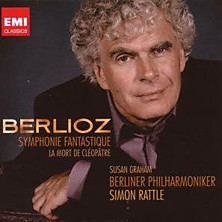