It is impossible to overstate the importance of Orange Juice, and even though part of their project was to puncture the pomp and seriousness of the rock canon, they must now be regarded as an enormously significant band which proved pivotal not once but twice. First, in providing a bridge between dour post-punk and the shiny early-80s "new pop" of ABC, Heaven 17 et al; and then in pointing a way out of that funky cul de sac by re-embracing guitar music, just as The Smiths were asserting their faith in classic rock principles at the height of new romantic synthmania.

In many ways, Orange Juice – with that deceptively innocuous name, so evocative of their aesthetic – were superior to The Smiths, more multifaceted and complex (they hailed their lack of worldliness but were nothing if not knowing). And their frontman Edwyn Collins was like Morrissey only with a more advanced sense of irony and a better, more varied record collection. Morrissey’s raffish wit and arch olde-worlde language were already in place on those early Orange Juice singles for Postcard – where Moz sang Heaven Knows I’m Miserable Now, Edwyn exclaimed, "Ye gods, I’m simply thrilled, honey" – while Johnny Marr’s Byrds fetish was pre-empted by the charged jangle of Blue Boy et al.

On this massive anthology – comprising 130 tracks, including dozens of excellent unreleased tracks and previously unavailable material, plus a DVD of videos and TV/live performances – you get a sense of the breadth of Orange Juice’s remit during their six-year career. Disc one begins with the (ironically) naive exuberance of Falling and Laughing from early 1980, when Collins and company were making radical claims to being equal parts Velvet Underground and Chic, but it’s not till Poor Old Soul that the guitars become funkily rhythmic. You have to wait until the end of disc two and the bonus cuts tacked on after the You Can’t Hide Your Love Forever album to see their full transformation from indie guitar band to the electro-pop hitmakers of Rip It Up, their top 10 single from 1983.

Together, these six CDs tell a story, and by the end of each you get a glimpse of the next chapter (rockabilly energy on disc four’s Texas Fever; enervated rock-soul by disc five’s final self-titled affair). Meanwhile, the DVD shows how great OJ looked, whether in their early days, when Edwyn sported his Roger McGuinn fringe, or during their brief chart phase, when he again beat Morrissey, this time to the quiff. A timely reminder of all that rings true. 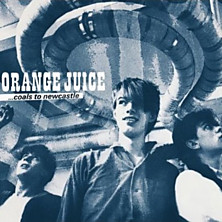