Jack Savoretti Before the Storm Review

If you had never heard (of) him before, you would swear Jack Savoretti had timed his arrival on the British music scene to perfection. His gruffly soulful voice and introspective singer-songwriting chime with the music of Josh Kumra, and although he doesn’t have the faint glimmer of association with the world of grime enjoyed by Ed Sheeran you can see this album appealing to a similar audience.

The difference is that Savoretti is older than Sheeran by eight years and this is his third album. His first two – 2007’s Between the Minds and 2009’s Harder Than Easy – didn’t reach the commercial heights expected of someone with his husky tones and, let’s be honest, hunky frame, apparently losing out in the sexy-but-sensitive-troubadour stakes to James Morrison and Paolo Nutini.

For his third album, Savoretti is taking no chances. Produced by Martin Terefe (Morrison, Jason Mraz) and featuring a songwriting team-up with Steve Booker (co-writer of Duffy's Mercy), Before the Storm is a trove of gently strummed acoustica for fans of manly introspection and romantic navel-gazing. Not Worthy is the freewheeling opener, complete with handclaps, the kind of thing that would have made sense cruising down a US freeway in 1977. The Proposal takes this retro-country-rockin' to its logical conclusion, effectively revisiting the melody and brisk gait of Take it Easy by the Eagles.

Throughout the album, Savoretti’s voice is unreconstructed in its manly tenderness – you can almost taste the testosterone, even when he's being all anguished and alone. The titles and lyrics tell their own story: this is someone steeped in the language – and clichés – of the guitar-toting outsider. On Take Me Home he’s walking “down this lonely street”; elsewhere, he beseeches someone to Come Shine a Light.

Before the Storm is so pre-postmodern it’s not true – the only track that nods to music of the last 20 years is Changes, whose chord change is reminiscent of The Verve’s The Drugs Don’t Work. A more interesting inclusion would have been his duet with Sienna Miller, Hate & Love, as used in The Vampire Diaries. The track’s unexplained absence is a shame because it is, production-wise, a leap into new echoey, reverb-drenched territory. But it’s unlikely it would have sat easily beside many of these numbers, these ragged and raw confessionals that could have been released at any time in the last four decades. 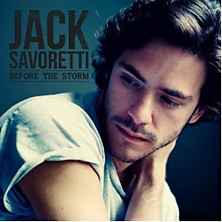