Full of implausible leaps of imagination normally reserved for dreams.

In some respects, Trent Reznor inviting Autolux to support Nine Inch Nails on their 2005 American tour raised more eyebrows than him recording an album at the site of the Manson Family murders ever did.

You’d expect an unhealthy interest in bloodletting from a man whose music is an exercise in aural sadism, whereas a fondness for lo-fi experimental pop seems much more shocking. Especially when this Los Angeles trio sound so polarised from Nine Inch Nails: organic rather than industrial, fuzzy rather than jagged around the edges. And where Nine Inch Nails’ 2007 album Year Zero was set in a dystopian future, Autolux feel more like they live in a quaint antique shop sticking old guitars and analogue synths together with production as thick as Plasticine.

But Reznor is just one of the famous fans Autolux have picked up since 2004’s debut album Future Perfect: Thom Yorke, PJ Harvey, the Coen Brothers and Flaming Lips have all sung their praises. Musically, Autolux share most ground with the latter, but they also found a natural home on the Coen Brothers’ DMZ label, to which they were signed in 2002. Like the Coen Brothers’ films, their much-delayed second LP Transit Transit is an album that constantly keeps you guessing. Garage rock nugget Census suddenly slides down a greasy pole of bass and bleeps halfway through, the electronic gurgles of The Bouncing Wall blossom into Beach Boys harmonics, and the epic finale The Science of Imaginary Solutions sees drummer Carla Azar’s vocal slowly drowning beneath feedback.

The fact that Azar, guitarist Greg Edwards and bassist Eugene Goreshter’s voices are so androgynous in unison, and that they nod heavily towards My Bloody Valentine, means that Transit Transit sticks out far less amidst the current shoegazing revival than Future Perfect did six years ago. But where people now use the term dream-pop to describe a band like School of Seven Bells, whose music is one warm amorphous haze, it actually suits Autolux much more: Transit Transit is full of the sort of implausible leaps of imagination that normally only happen in your sleep. 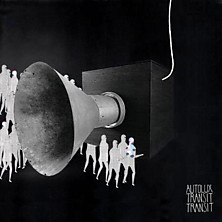