It’s a pure slice of New York nightlife, and not to be missed.

A former graduate of Gerry Mulligan’s Quartet and Phil Wood’s Quintet, Bill Charlap is one of America’s foremost interpreters of standards via the ivories. While his time with Mulligan ensures that his improvising skills are consummate, his experience from backing luminaries such as Tony Bennett and Sheila Jordan also means that his approach to the great American songbook is never less than dazzling. This live album proves it and then some…

With the team of Peter and Kenny Washington on bass and drums respectively) Charlap visited the sacred shrine of his youth, the Village Vanguard, in 2003 to record where he once heard heroes like Jim Hall, Tommy Flanagan and Joe Henderson. Why it’s taken Blue Note so long to let this gem out of the vaults is incomprehensible. But let’s be glad they did.

Running the full gamut of classics from legends like Harold Arlen (“It’s Only A Paper Moon”, “Last Night When We Were Young” and “My Shining Hour”) Rogers and Hart (“The Lady Is A Tramp”) and Vernon Duke (“Autumn In New York”) Charlap also drops in numbers from the aforementioned Hall (“All Across The City”) and even Mulligan.

The latter’s ''Rocker'' opens proceedings in amazing style. Formerly made famous by Miles, this trio’s version immediately demonstrates the elastic and playful rhythm section’s interplay with Charlap’s bouncy delivery. They seem to be able to change tempo at the drop of a hat and recover without breaking sweat. ''My Shining Hour'' showcases the telepathy required to play at breakneck speed as well as the two Washington’s considerable talents, uneclipsed by Charlap himself.

But it’s on the quieter numbers such as “All Across The City” and “Last Night When We Were Young” that we really hear how Charlap’s approach has matured and perfectly suits this type of material. Never hurried, his ear is subtle and his grasp of arrangement is peerlesss within this form of mainstream playing. It’s a pure slice of New York nightlife, and not to be missed. 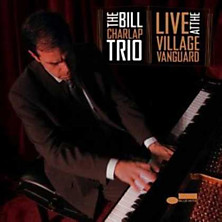