In December 2009, Mumford & Sons and Laura Marling embarked on a cultural exchange with traditional Rajasthani musicians Dharohar Project, involving some unlikely collaborations and gigs together in Delhi.

The return leg of this intriguing exchange is the subject of this eight-track live EP, recorded at a gig at Camden’s Roundhouse as part of the iTunes Festival in July, 2010. Given two solo songs each, the recordings colourfully culminate in a mass jam session of colliding cultures, rhythms and harmonies – mercifully without a rent-a-religion, new age "omm" in earshot. Instead there’s a clattering, driving energy that unites the musicians in a passionate, stomping hoedown and results in infectious grins all round.

Marling’s individual tracks, I Speak Because I Can and Rambling Man, tell us nothing new about the way this massively talented singer songwriter is becoming an increasingly confident live performer, but Mumford & Sons’ offerings of The Cave and Roll Away Your Stone quickly turn from heart-on-sleeve lovelorn odes into raucous, straw-chewing, sweat-dripping indie barn dances. Piercing, tonal wails, pounding tablas and rattling bells introduce the Dharohar Project’s classical Indian reels, but it’s not until all the musicians unite for the thrilling finale that things really start to get interesting.

The brooding opening of Mumford & Sons’ The Darkness explodes into a tantric swell of banjos and duelling sitars, as Marcus’ gravelly roar is overwhelmed by yelping, hollering, shrieks of Punjabi pleasure. Laura Marling’s Devil’s Spoke is given the same treatment, intertwining with the Project’s track Sneh Ko Marg to create a thundering mix of haunting English storytelling with rushes of Bollywood dramatics and evocative Eastern howls.

A startling connection builds, not through gentle, traditional melodies, but from the charged, physical stomp of the rhythms and a shared understanding of the spirit of each other’s music. All initial fears of patronising, multi-cultural do-gooding, faux-hippie culture stealing and misguided Beatles homages are unfounded, as any hint of tweeness is blown away by a vibrant cacophony of Anglo-Indian joy. This is a triumphant experiment that feels surprisingly authentic and natural and, even more importantly, is an uplifting, celebratory piece of music in its own right. 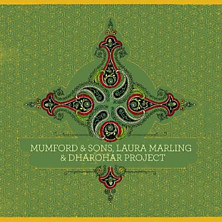