This folk opera, while not without fault, is by and large a success.

The concept album is a much-maligned thing – perhaps not unfairly, given the excesses of certain 70s prog-rockers. So the news that this Vermont-based singer-songwriter’s latest work is a folk opera based on “the ancient Greek myth of the poet Orpheus” may provoke a few groans. Fear not! Although Hadestown isn’t without fault, it is, by and large, a success.

This is partly down to the amount of time and energy that has been lavished on it, as the beautifully designed CD sleeve suggests; so much for public arts funding. Hadestown began evolving in 2006 as a stage show, which Mitchell road-tested with a 22-member cast. She also recorded one of the songs on her 2007 album The Brightness. Originally called Hades & Persephone, and performed solo by Mitchell, it’s here retitled How Long? and is a sung dialogue between Ani DiFranco (Persephone) and Greg Brown (Hades), with strings, piano and atmospheric percussion.

Mitchell’s sugar-coated, girlish vocals won’t appeal to all, and initially distract from her considerable talents as a lyricist (“The river Styx was a river of stones”), so the use of a distinguished and well chosen cast to sing the various parts is a plus. And while Brown’s creaky baritone is another acquired taste, he does make a convincing Hades. The unmistakeable falsetto of Bon Iver’s Justin Vernon (Orpheus), and Ben Knox Miller of The Low Anthem (Hermes) are definite assets, and even the usually annoying DiFranco is well cast as Persephone.

Like most operas, the plot is fairly opaque and more or less an empty vehicle for voices, so Mitchell’s mixing of contemporary and historical settings with one of the many original versions of Orpheus isn’t a problem – there’s clearly a narrative, even if it isn’t easy to follow. It’s the fine and varied arrangements by Michael Chorney and Todd Sickafoose, and Mitchell’s memorable melodies that hold things together.

In a Vaudevillian manner, she plunders a wide array of idioms, ranging from traditional American folk (Wedding Song seems to draw on Mockingbird) through Tom Waits mannerisms, country, gospel, jazz, chamber music, and the Penguin-Cafe-Orchestra-goes-to-India vibe of the instrumental Lover’s Desire. It all makes sense eventually. Kind of. 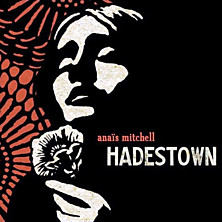