Iceage’s 2011 debut New Brigade was a frantic and breathless din that struck a chord with those bored by pop and alternative rock’s propensity for gloss and over production.

It arrived hewn from hardcore punk dynamics, barbed like the best of lo-fi English post-punk and shrouded in a particularly shadowy, Scandinavian sense of seasonal affective oppressiveness.

The band’s shyness in interviews was mistaken for aloofness, and singer Elias Bender Rønnenfelt’s American Apparel-esque good looks made him a Tumblr favourite.

But Iceage are better than this, and You’re Nothing’s many reference points – the tar-black Norwegian metal of Mayhem colliding with the early punk of (pre-Joy Division) Warsaw and forgotten greats like Scars alongside the early roster of Washington DC’s Dischord label – might be lost on fashionistas.

Besides, bands don’t always ask for such attention and anyone making music this raucous, anxiety-addled and radio unfriendly are clearly doing so not for commercial or trend-driven purposes.

Iceage remain possessed with an urgent energy that is exclusively the domain of the young. The title track is a sub-two-minute burst of musical malice and Burning Hand shares similar sonic space with the taut post-hardcore tunes of Fugazi and Rites of Spring.

The brute delivery of Coalition is more reminiscent of Southern Californian hardcore crews Germs and Circle Jerks, Rønnenfelt’s laconic and untamed vocals the very antithesis of slick US punk counterparts citing these same bands as influences.

There’s real tension in there – and soul, too. “There’s a vile fury within us,” Rønnenfelt yells on Everything Drifts.

You’re Nothing is a step up from New Brigade, a debut that threatened to fall apart at any given moment. They still play with that same shambolic abandon on which only the very best punk bands are based.

Easy on the ears they are not, yet it’s hard not to get swept along by Iceage’s droll, disaffected but ultimately joyous punk surge. 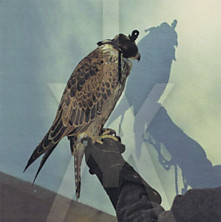