Shows that going back to basics isn't perhaps the step backwards it might seem.

Far more glamorous than your average indie band, there was a time when it looked like The Long Blondes were going to make it big. NME and Radio 1 loved them, three singles from Somebody To Drive You Home' went top 40, and Once & Never Again was the soundtrack to every indie disco. Then came Couples; album number 2; and everything seemed to unfairly dry up.

So, presumably to renew some interest, the band are going back to basics with Singles - a compilation of their first four 7"s released on small labels like Thee Sheffield Phonograpic Corp, Angular and Good & Evil, and thus essential only for your most die-hard fan.

Like so many Sheffield bands before them, Kate Jackson and her fellow scarf wearing pals make intelligent indie music with some of the wittiest lyrics in town. Now we hear them at their rawest form, before the likes of super producer Erol Alkan got hold of them and added unnecessary whizzes and bangs.

The very first releases New Idols and Long Blonde are, in fact, so rough and ready that the distortion hurts your ears. But Autonomy Boy soon presents their delicious melodies that we that made us love them so, with the original versions of the complicated Giddy Stratospheres and Lust In The Movies a definite highlight. On the flip side, the shoutier riot grrl side of the Long Blondes blasts through on tale of heartbreak Separated By Motorways.

Distinctly English with tales of Peterborough and darts, The Long Blondes should be a national treasure. Despite having lost their way, this compilation shows that going back to basics isn't perhaps the step backwards it might seem. 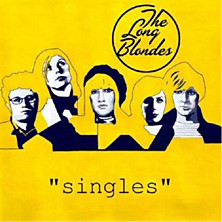