Last year Megadeth bandleader Dave Mustaine published a ghost-written autobiography that was so "unputdownable" that were it available in a laminated edition readers would have taken it into the shower. For a man whose defiant sneer is known to metal fans the world over – despite a particularly chequered recording history, the group’s previous album, 2009’s Endgame, entered the US Billboard charts in the top 10 – the songwriter came across as being a sensitive and at times even vulnerable character. Amid tales of heroin addiction, of being fired from his job as lead guitarist with Metallica – a wound which although calmed still refuses to heal – of taking so many drugs that he fell asleep on his arm and almost called time on his career as a guitarist, as well as getting through more band members than The Blue Man Group, the book chronicles a life populated by enough inner demons to launch a horror movie franchise.

It’s a shame, then, that Th1rt3en is not quite as compelling as the man who created it. Even so, at their most unremarkable Megadeth remain group entirely incapable of recording a boring album. This is due to the fact that Mustaine – a man who Slash described in his book as being "a riff machine" – usually packs each song with at least twice as many ideas as are strictly necessary. Over the years this instinct (it is much more than a mere tactic) has produced tracks of the quality of 1990’s pretty much untouchable Holy Wars… The Punishment Due. It has, though, also produced more than its share of stinkers, a fact which affords the release of any Megadeth album an air of unpredictability.

Unusually, then, Th1rt3en – fittingly, the quartet’s 13th CD – is something of an unremarkable affair. Not a bad album, but not one for the ages. Songs such as the title-track and the quite brilliant Sudden Death do stir the senses, but elsewhere much of this work is a quiet burn rather than a sudden rush. On the one hand it’s at least something that Megadeth aren’t attempting to squeeze themselves into younger men’s clothes. But on the other, longtime fans of the group may miss the twists, not to mention the bite and snarl, of previous albums. 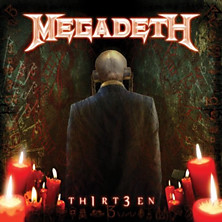