Fans of Nicola Benedetti - and there are lots of them - will love this CD.

Music by two English composers graces this pleasing new disc from Nicola Benedetti – Vaughan Williams’s timeless The Lark Ascending and a collection of works by John Tavener, including Lalishri a new work written especially for the soloist. It’s an unusual programme, and makes for an enjoyable and refreshing listen.

Fittingly, the disc opens with the beautiful, atmospheric The Lark Ascending. Like the work’s eponymous bird Nicola Benedetti’s playing soars and floats, and she resists the ugly slides that often, for me at least, mar other (more famous) recordings of this piece. Her playing is lyrical and assured, and receives some excellent support from Andrew Litton and the London Philharmonic Orchestra to create a performance that listeners will find highly enjoyable. Having said this, for those interested in the piece itself, the pure 'Englishness' and perfection of Hugh Bean’s legendary recording under Sir Adrian Boult is still the one to beat.

Tavener’s Song for Athene is the haunting work first heard by many at the funeral of Princess Diana, in its sung version. Benedetti’s playing matches the intensity of this deeply striking piece as it slowly builds, eventually blending and almost becoming lost in the lush orchestral sound as the music reaches its glowing climax. With its hypnotic semi-tone element and deep underpinning bass notes this is spine-chilling music which listeners will return to often. If only it were longer.

Suitably short and gemlike however, is Tavener’s Indian-inflected contemplation Dhyana, which sets the scene for the final work on the disc, Lalishri – both works having been written for the soloist. Inspired by the 'innocent intensity' and vocal quality of Nicola Benedetti’s playing, it falls into five sections ending in what Tavener describes as 'a musical expression of bliss'. It’s a hugely varied and demanding work with the odd echo of Schnittke and Adams and a recurring nod at Bruch’s First Violin Concerto. From the excellently controlled opening section to the relentless athleticism of track seven (a movement which leaves the listener feeling quite breathless), Benedetti gives an excellent, spirited performance.

Fans of Nicola Benedetti - and there are lots of them - will love this CD. 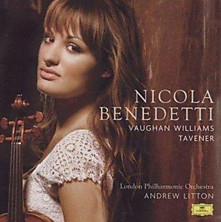