Witness the power and conviction of Zoe Rahman live...

Zoe Rahman's prowess at the piano shouldn’t be underestimated. In the decade since she shot to national attention as the Perrier Young Musician of the Year, Rahman has matured into a pianist of keen intelligence and wide-ranging imagination. Evidence of such is to be found in dazzling abundance on this first live album from the British-Bengali soloist.

Recorded on the spur of the moment at the Pizza Express Jazz Club in London’s Soho in April 2007, Rahman is joined by longtime collaborators Oli Hayhurst on double bass and Gene Calderazzo on drums. Rahman's clarinettist brother, Idris, also puts in a guest appearance.

The Rahman siblings spur each other to thrilling reciprocity in the magnificent tumbling cascades of notes in delirious freefall that is Mario Laginha's Ha Gente Aqui and on the hauntingly atmospheric and evocative Bengali-influenced Mucche Jaoa Dinguli, lifted from 2006's Mercury Prize-nominated long player, Melting Pot. As is the remarkable self-penned Last Note, which plays like three separate solos wrapped into one distinctive and coherent whole.

Impeccable ensemble is on effortless display throughout: from the ruminative, rumbling opening of Abdullah Ibrahim's The Stride, through the delightful tongue-in-cheek humour of the cleverly confused Friday 13th and the teeming bustle of Egyptian Tune Dance, both by Rahman's onetime teacher Joanne Brackeen, to the vivaciously characterised, beautifully modulated cover of Phineas Newborn's wonderful Harlem Blues.

With negligible audience intrusion, the recorded sound is superb, the set delivered with vibrant conviction, Rahman is clearly fast developing into a keyboard player of considerable power. 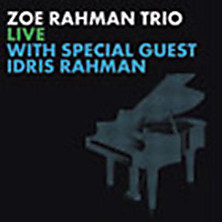