Buzzing career overview from Manchester’s own wizards of wibbly.

It’s impossible to underplay the importance of 808 State. Arriving at a time when acid house was starting to infiltrate the hipper enclaves of UK clubland, the original trio of Graham Massey, Martin Price and Gerald Simpson took the hard sound of Chicago house and lashed it to industrial grooves and experimental music. Late-80s floor-fillers like Flow Coma and Pacific State were hugely influential on a new generation of techno-heads, chief among them Aphex Twin, Autechre and Orbital.

Indeed, it’s Aphex Twin’s 2001 remix of Flow Coma that kicks off this terrific retrospective. A star-stuffed one it is too, including collaborations with Brian Eno, Björk, Simian, James Dean Bradfield, Guy Garvey and onetime ZTT labelmate, Trevor Horn. What’s particularly fascinating is just how far ahead of the curve 808 State clearly were. Sharp-edged rave classics like Cübik and In Yer Face pre-date the whole superstar DJ/superclub boom of the 90s. But by the time The Chemical Brothers and Cream had become steady fixtures on the new dance scene, 808 State were already moving away from the kinetic thump of techno-funk and were investing the music with more tranquil, ambient tones. Theirs was music for both mind and feet, highlighted here by the luminous Björk set-to, Qmart. And those still lamenting the demise of 90s yoof-TV Friday-nighter The Word (look, you never know) will be buoyed by the appearance of Olympic, its theme tune.

The latter is one of several exclusive (re)mixes on this set. Others given a fresh facelift are Cübik (Monkey Mafia), Plan 9 (Trevor Horn) and the "808 tape mix" of the wonderful Timebomb. The weird’n’glitchy stuff still sounds great (especially a revamped 606, with Simian) but Guy Garvey’s turn on Lemonsoul proves they were always capable of delivering a swoonsome mood piece. Avid followers will be especially intrigued by two spanking new arrivals: Spanish Ice and Metaluna. The latter brings everything around full circle by smartly segueing into Compulsion, the closing track on 1988 debut LP Newbuild.

It’s testament to 808 State’s lasting excellence that there’s no room here for Lift, Open Your Mind or Ooops. Nor is there space for hi-calibre guests like Ian McCulloch, Bernard Sumner or Lou Rhodes. "808 State will return," claim the liner notes. In the meantime this’ll do very nicely. 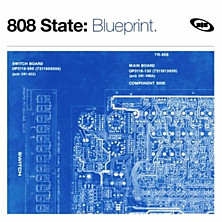