Given the preeminence of Danger Mouse's position as the producer with the midas touch and one half of Gnarls Barkley, it would be entirely understandable if singer and multi-instrumentalist, Helena Costas were to be somewhat overawed or perhaps, overshadowed by his considerable presence.

Yet far from being an uneven contest this is in fact a partnership of equals delivering an engagingly lavish set replete with quirky, off-centre atmospheres.

Go Walking (arguably the best song ever written about Hadrian's Wall) and the poignant Nothing Is Ever What It Seems enthrall and inspire goosebumps. Like many of the current crop of breathy singer-songwriters, her voice wavers and swoons alarmingly, like a canary in a coal mine at times.

The album is dripping with the subdued, trippy pastoralism you find on albums by The Incredible String Band, Amazing Blondel or Trees. However, this rests comfortably alongside the squalls of day-glo 21st Century electronica that leech into The Last Laugh's sonic landscape.

However, the real star is not the production values but Costas herself, leaping from one improbable song to another, emanating a strange, alien grace and a beguiling dream-logic all its own. 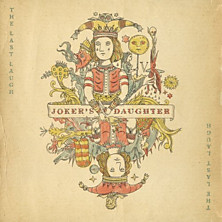