Kentish singer’s second crack at a music career may lead to rich rewards.

You can be forgiven for asking, who is Ben Montague? But had things gone differently for the Kentish singer back in 2010, few would have to pose the question.

Back then, singles Haunted, Broken and Can’t Hold Me Down enjoyed solid rotation on the radio waves – but neither record label nor publisher came calling. Music didn’t prove a viable career, so Montague returned to work as a barman. Until, that is, a chance hearing of Haunted at a petrol station inspired him to try his luck once more.

And this time around things are looking rosier. Montague headed to Rockfield Studios with Dave Eringa – the man behind albums for Kylie and the Manics, among many others – to record this album, his third. And the investment has paid off: this is a cohesive, enjoyable set of songs.

He’s got some fine supporters on his side, too. Emeli Sandé has remarked on how ace she feels he is, while he’s shared stages with the likes of The Wanted, Stereophonics and (Starsailor’s) James Walsh. He’s popping up on breakfast TV sofas and garnering further radio success with Love Like Stars.

If Montague’s sound is somewhat predictable, one can’t fault its design. He operates in the centre of a Venn diagram, with boyband-style arena-friendly wares on one side and Script-recalling pop-rock crossover material on the other.

If the strings-drenched Already Leaving and piano elegance of Deep End don’t make him a star, both would work comfortably as an X Factor winner’s competition-climaxing song.

And there are further potential hits here: Liberty Road is a fine collaboration with Lucie Silvas, and the melodic, lighters-aloft Haunted is included too, perhaps ripe for a second spell on the playlists. Tales of Flying and Falling feels like an album of songs you know already, and its radio-friendly appeal could easily attract a broad audience. 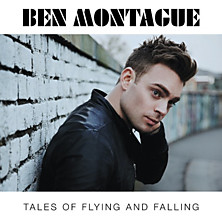