There are so many meaningless washes of sound around these days that it's easy to get caught switching off immediately once the first hint of cave reverb reaches your ears. Rather than let the waves lap at the cochleas in an irritating but monotonous manner, Londoners Still Corners seem to know how far to plunge their songs into the depths of refraction.

First of all, they make sure songs are actually there. Breathy though Tessa Murray's vocals may be, she's still carrying a hauntingly simple melody each time, as well as being capable of whispering seduction. Submarine, the closing track, is sublime. Built around a repetitive solid bassline, a guitar glitters across it, while all manner of spectral noises billow below. Opener Cuckoo is a languid statement, laidback but with a relentless attempt to seep into your dreams through gliding sounds. Also, it would just avoid being ominous if it didn't have the brooding synth-like bassline rumbling underneath; but then it wouldn't be half as memorable as it is here. There's a certain eerie horror flick feel on Circulars, the keyboards sounding like a modern silent movie score. Into the Trees has a thrilling opening squeal, which returns during a reeling instrumental, and it perfectly complements the slow, chiming guitar while shards of sound clamber over the mountainous, building in voice, replete with waves of echo and trembling drums.

There's monochrome nostalgia at work here, and even the foggy plumes of noise suit the undeniable retro influence. Yet, everything is so palatable because everything seems a natural consequence of the songwriting and performance. None of the effects feels forced or laid over the top like a melody-sucking placenta – it sounds like four people with a will to make a shroud of noise, in a room with extraordinary acoustics. Initially it’s the soothing splashes, outside of the lines, that draw your attention more than the stark but hazy band at the core. Soon, though, the extraneous sonics pull you into their effortless cool.

As far from the vacuous reverb-hounds they could be associated with, Still Corners have given us an enjoyable toe-dip in their glistening pool. Uncomplicated, subtle but memorable songwriting that might well have been played and recorded in a bedroom studio on Holloway Road. But however it was captured, it's refreshing to be bathed in this melodic calm after becoming engulfed in so many raging torrents of emptiness. 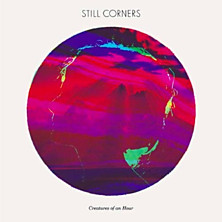