With age comes maturity, and there’s no doubt that Natasha Khan’s third album under her chiropteran pseudonym, Bat for Lashes, sees her addressing adult themes in an adult fashion amidst adult surroundings. It’s something that’s helped by the fact that with silver and gold albums come bigger budgets, and The Haunted Man sounds very expensive indeed.

The signs were there with Laura, the first song to be revealed earlier in 2012. A poignant piano ode to a suffering friend, its melody lingers long enough to erase the chorus’s clumsy lyrical climax: “You’re the train that crashed my heart / You’re the glitter in the dark.”

Co-written with Justin Parker – who also worked on Lana Del Rey’s Video Games – it suggested Khan was prepared to show an elegant but more vulnerable side, something reflected by the album’s cover, which features an artful nude portrait by Ryan McGinley.

Elsewhere she calls upon other celebrated names: Beck appears on Marilyn, Portishead’s Adrian Utley guests on Horses of the Sun and PJ Harvey collaborator Rob Ellis is also in evidence.

But The Haunted Man settles more for sophisticated sonics rather than songwriting: David Kosten’s production jettisons the mild claustrophobia of Two Suns for a more expansive sound, and too often the gloss sparkles more than the songs themselves.

Lilies opens with ominous bass synths rumbling in the background before swelling with the kind of theatrical arrangements favoured by Goldfrapp’s Felt Mountain, while Winter Fields offers conspicuous kettle drums and ballroom strings for added melodrama. And yet there’s an emotional detachment, a sense that Khan is merely a great actress signposting moods rather than sharing them.

The stuttering rhythms of Horses of the Sun are more engaging, a sinister edge giving way to a buoyant chorus, and Oh Yeah manages to combine her gothic tendencies with male choirs, sparsely programmed percussion and piano flourishes for a grand, swirling climax.

But while The Haunted Man is an impressive record, one heavy with earnestness and polished sophistication, it’s more like The Tin Man: somehow it lacks a heart. 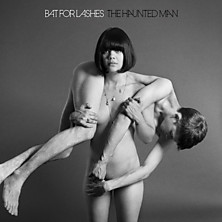