Music filled with love and not a little wit.

Messing about with time and space is something which M. Ward does exceedingly well. Last year, the musical maverick operating from Oregon, got together with actress Zooey DeSchanel under the title of She & Him. Together they created a glorious throwback to 60s girl-groups and sunny pop with cracking choruses.

Though this outing is perhaps a touch less perky in places and prone to a darker introspection, it's just as flawless in terms of being able to dial up the sounds of another era and transposing them to the 21st Century.

With Hold Time (his sixth solo) he continues to place accomplished cover versions next to original material and defying us to spot the difference. When it comes to the business of retro-fitting pastiches, maybe only Nick Lowe does it as convincingly as this.

Full of alluring detail, Matt Ward reels the listener in hook, line and sinker; the Beach Boys' rumble of To Save Me; Jailbirds easy-going backbeat flushed with stirring Mellotron strings; front-porch folky intimacy of One Hundred Millions Years which could almost be straight out of the Library of Congress archive.

Only occasionally does the vintage patina get overdone. Never Had Anybody Like You stomps into tub-thumping Glam rock territory - an unsettling brew that imagines Trex fronted by Alvin Stardust and backed by the Glitter band.

Despite Ward's amiable growl of a voice (assisted on one track by the earthy grit of Lucinda Williams), it's an instrumental that really steals the show.

Frank Sinatra's black-dog depression torch-song, I’m A Fool To Want You, is converted into a haunting shuffle. When Ward's plaintive tremelo-heavy guitar bends into the gloom of lonesome reverb, the hairs on the back of your neck are guaranteed to stand to attention. Music filled with love and not a little wit. 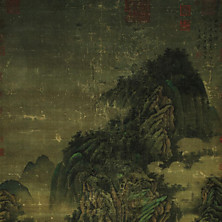