An exhilarating stunt that more than whets the appetite for what comes next.

Okay, so it’s a stunt album, a collection of a cappella songs, none of which have been written especially for the project. And on paper, the running order is a hotchpotch, Rant surely the only album to ever find equal space for Meet Me Halfway by The Black Eyed Peas, The No.1 Song in Heaven by Sparks, and the 13th century traditional English round Sumer Is Icumen In. A regular Futureheads record, then, this certainly is not.

As if to pre-empt any criticism of the project, the band has issued a series of flinty press statements, rightly pointing out their long history of inspired close harmony work. Barry Hyde summarised the band’s position by stating firmly: "A Futureheads fan who doesn’t get Rant is not a Futureheads fan."

Top marks, then, for conception, and commitment. But does the world really need an indie Flying Pickets? Well no, probably not. Thankfully, the band’s natural gusto and intelligence quickly dispels that thought. There’s too much fun to be had as they hurtle pell-mell through some of their own best songs – Robot, Meantime – as if their mouths are guitars, and even manage to keep their original yelped harmonies going as well. It’s a gripping ride: a four-man one-man-band.

The middle section of the album is devoted (with a brief Sparks interlude) to historic folk song, as if reminding listeners that this is also a continuation of a fine old tradition. But not all of the peaks are old. Acapella, the Kelis song that started the whole project off (the band worked up a version for a Radio 1 Live Lounge session in 2010), brings a caffeinated charge to proceedings, a tight focus after the boozy swagger of The Old Dun Cow. Then there’s the sparky retwizzling of Richard Thompson’s Beeswing: given a remarkably ornate arrangement that tells a sad story through gritted teeth, while voices spiral around each other like a flock of starlings.

So while Rant may be a stunt album for The Futureheads, it’s an exhilarating stunt, and one that more than whets the appetite for whatever it is they choose to do next. 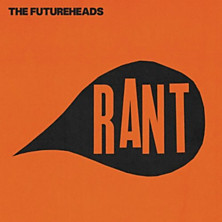