The Supremes Where Did Our Love Go Review

The Supremes’ metamorphosis is joyously captured on their second album.

The elation of hearing The Supremes’ second album is evident from the first handclaps of the opening title track.

The marriage of writing and production team Holland-Dozier-Holland and the former "no-hit" Supremes (Diana Ross, Florence Ballard and Mary Wilson), as they had became known in Motown circles, was one of label owner Berry Gordy’s most inspired decisions – and made Motown the stellar force that is so fondly remembered today.

Where Did Our Love Go was, in fact, a rag-bag of material that the group had recorded from as far back as September 1962, compiled to coincide with their final breakthrough in the US and UK charts. As a result, it contains greater variation than those shimmering singles would suggest.

Of course, the four big numbers dominate – the title track, Baby Love (which, for many, will forever be how they remember the group), Come See About Me and When the Lovelight Starts Shining Through His Eyes. All are copper-bottomed cornerstones of Motown’s and The Supremes’ legacy.

If you sequence the album in recording order (thanks to the annotations of the 2004 reissue) you hear the group flowering, beginning with 1962’s I’m Giving You Your Freedom and ending with Baby Love, recorded just weeks before the album was released.

I’m Giving You Your Freedom is a down-tempo stroll that finds Ross singing in a lower register with beautiful, soulful support from Ballard and Wilson.

A Breathtaking Guy, written and produced by Smokey Robinson, and Norman Whitfield’s He Means the World to Me both sound like filler on a "rock’n’roll heartbreak" album.

It's on When The Lovelight Starts Shining Through His Eyes when it all comes into focus: an exuberant splash of colour, with artists, producers and musicians working together to create something very special indeed.

The Supremes are almost a text-book example of a "singles" rather than "albums" outfit. Yet Where Did Our Love Go is a breathtaking capture of the metamorphosis of a group emerging out of the shadows to become one of the world’ leading pop acts, as exciting as any Beatles release of the time. 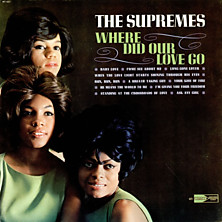