F***ed Up’s third studio album is about as resolutely un-punk as it gets. In fact, punk attitude probably has nothing to do with F***ed Up anymore. The trappings of long-form rock music have most definitely taken hold, but in no way is that a bad thing. Described by the band as a rock opera, David Comes To Life is simply large in length as well as narrative. Of course, it’s extremely difficult to connect to a rambling love story that takes in elements of urban degradation and despair when it’s being wretched out by Father Damian Abraham, but it doesn’t matter when the songs themselves (all 18 of them) are so entertaining.

In truth, the only indications on a passing listen that this is anything other than a very long punk rock album are the book-ending instrumental passages. In-between those two pillars (the second of which, Lights Go Up, is beautifully bucolic) stand a series of indestructible songs. Queen of Hearts introduces the titular David and sees him meet Veronica, but inimitably bellowed with pleasingly simplistic power chords underneath. Running on Nothing sees the jubilation of young love turn to raw, stinging sadness. For both songs, it’s not the difference in emotion that impacts; it’s that they’re so sincerely meant.

To commit to a concept so fully seems foolhardy when the music doesn’t expand as much, but F***ed Up triumph precisely because of that commitment. Where the knowing excess of more traditional concept albums or rock operas seek to provide as much musical colour as narrative, David Comes To Life proves that simple fervour is sometimes enough. One brilliant rock song follows another, defiantly leaden in construction but stalwart in performance. Rarely does such simple rock sound so satisfying.

When they traipse merrily through this bloodied wreck of a record, any memories of F***ed Up smashing up a toilet on MTV (as they once memorably did) seem to be irrelevant. This is a different band, and they’ve found a new conviction. Punk may be dead for them, but at least they’ve remembered that rock music certainly isn’t. 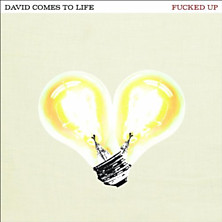