A genuine classic, unlike anything any other artist will release in 2011.

Constant line-up changes and frequent diversions in musical direction means Destroyer are shamefully more of a cult attraction than a household name. But that might be about to change. This seamless collection of songs is gaining increasing numbers of admirers, and reached a respectable chart position of 62 on the Billboard chart when it was released stateside in January. It now lands in the UK courtesy of Dead Oceans.

Destroyer is effectively Dan Bejar from Vancouver, who since 1995 has steadily garnered fans of indie rock/shoegazing grooves. Pavement have been a previous touchstone, while his last album, 2008’s Trouble in Dreams, mined glam rock; but this time he appears to have written an album of love letters to the 80s pop of Scritti Politti and Roxy Music. It’s effectively the sound of a man so tired of waiting for a follow up to Roxy’s Avalon that he’s written it himself.

Bejar claims his hitherto inconsistent line-up is now settled, and it rings true. Blue Eyes is typical of the album’s whimsical pop, recalling The Field Mice, The Blue Nile and Saint Etienne. It draws a line in the sand early on, with the line "Your first love’s New Order"; fans of whom will also grin at the bassline of Savage Night at the Opera, coming across like a Low-Life outtake.

Expecting people to listen to a song called Suicide Demo for Kara Walker is brave enough, but making it eight minutes of lush harmonies, guitar licks and reverb is visionary. The title-track may sound similarly dreamy, but Bejar has had enough of "Chasing some girls… chasing cocaine through the backrooms of the world all night", leading to a wonderful sign-off: "Sounds, Smash Hits, Melody Maker, NME / All sound like a dream to me."

There is no shortage of hooks and sweet female harmonies, but this album is as much as about atmosphere as hit singles, as the strident guitar line of the conversational Song for America proves. Few tracks clock in below five minutes, while the closer, Bay of Pigs, a come-down hymn which makes a case that the second summer of love never ended, registers in at many more, yet wastes not a second. Despite this, at only nine tracks you’re left wanting more, and with the sense of being privy to an album too many people will miss. Kaputt is a genuine classic, unlike anything any other artist will release in 2011. 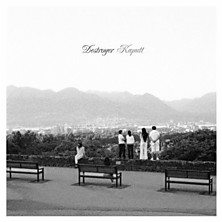