Keane - are they the piano-pumping bearers of glad tidings, or the band you want to throw things at when they appear on your Sunday morning TV? Chances are it's one or the other, there's no in-between with Keane. Their brand of uplifting guitar-free cleverness (and they are clever) says nothing to many people about their lives. Yet Perfect Symmetry, their third album, confirms them as just being bloody amazing at what they know. And unashamed of it.

Their piano-led schtick is possibly the antithesis of this month's other huge release, Oasis' Dig Out Your Soul, but take even half a minute to observe the architecture of Tim Rice-Oxley's music, and there's artistry aplenty going on here. Like the other heroes/pariahs of our age, Coldplay, they deal in grand gestures: songs that will have you holding your partner's hand in shared fuzziness. But maybe such things are necessary in this age? The Radiohead-lite closer, Love Is The End, may make a hardcore indie kid's stomach turn with its choirs, strings and life-affirming message, but why is this worse than REM's Everybody Hurts? It's still a mighty, mighty song that makes the heart swell.

Being more specific; Perfect Symmetry is slightly more adventurous than previous albums, yet the band never over stretch themselves disastrously. There's no message other than the power of love and the weight of modern existence. And, while Tom Chaplin's problems may not be fully alluded to, the past year's trials and tribulations do seem to echo throughout. There's a little lack of variation and the increased use of the synthesizer to colour their limited arsenal tips occasionally into the cheese zone; especially on the by-numbers, Again And Again, or the 80s-inflected Black Burning Heart. In fact it's clear that Keane have been listening to a lot of 80s pop. The intro to handclappy Better Than This is from Bowie's Ashes To Ashes. Yes, there are guitars in here (or maybe they're samples), but it's still the piano arpeggios that lift it all up. And Chaplin's voice may never rank with a Yorke, a Stipe or even a Martin, but his tremulous throat is still perfectly pitched on tracks like You Don't See Me.

Perfect Symmetry won't make converts, and it will never be listed as a classic. But somewhere, in the darkest of nights, someone will find comfort and a spark of something worth holding onto here. Such banal power may be trivial in the scheme of modern culture, but somehow that matters not. It's still a force for good.

Keane: they might just save someone's life. Just remember that the next time you feel like throwing something at your telly. 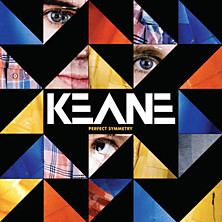