Producer’s debut has more depth than a lot of stuff that’s been tagged as chillwave.

Although the music on Galactic Melt – the debut album, and first actual physical release, by Com Truise – is the culmination of several years’ worth of noodling around on myriad synths and computer programs, in 2011 it sits in a voguish place. Seth Haley, the figure behind this New Jersey-based solo project, seems to have little problem with acknowledging the part nostalgia plays in his imagery. Track titles include VHS Sex, Cathode Girls and Futureworld (presumably named after the 1976 sci-fi movie); his album artwork suggests Joy Division’s Unknown Pleasures crossed with an Atari 2600 game box. All this, plus the goofy spoonerised moniker, is painfully emblematic of chillwave: one of those micro-genres which start almost in jest but slowly take root.

Haley’s background, before using the Com Truise name, was in IDM – indeed, the spectre of occult Scottish pranksters Boards of Canada still casts a shadow over his compositions. Soft-focus synth chords tussle with boom-bap hip hop drums and samples from long-lost TV broadcasts: Air Cal, Hyperlips and Brokendate each suggest he could have been responsible for BoC-style tracks ‘leaked’ online, upfront of some of their previous releases, and claimed as the real thing. While this can (should) be taken both as a compliment and a misgiving, it’s not the only string on the Com Truise bow. He’s a dab hand at deep, Vangelis-style beatless blowouts, such as opening track Terminal (as much as the track frustrates, coming in at under two minutes). VHS Sex, a gloopy wound-down abstraction of classic house, aligns him with Hype Williams – a London duo who have performed similar rewirings of 90s electronics recently, and faced similar accusations of smirky irony and empty signifiers.

In both cases, anyone who digs below the surface image ought to be rewarded. Haley is not attempting anything revolutionary on Galactic Melt, but he demonstrates a sight more depth than a lot of stuff that’s been tagged as chillwave (if we have to name names: Washed Out and Neon Indian, for example). In fact, here’s a radical idea: don’t judge him by those standards at all. 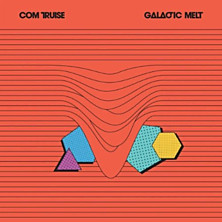