Songs of praise delivered with brains and power.

Not all rappers have to rise up through existing rap scenes, or fit existing MC moulds. Theory Hazit is a case in point. While born in Kentucky, Hazit boasts nothing of the greasy, crunked-up vibes popular with his Southern states kin.

Now relocated north to Cincinatti, Ohio, this deeply religious MC does street wisdom with a thoughtful moral dimension; meanwhile, the beats, some produced by Hazit, some courtesy of a diverse international team of producers including Tony Stone, JustMe and Re:Flex The Architect, match a knowledge of hip-hop history with the muscle of modern rap productions.

Hazit’s faith is fairly central on Extra Credit. Take the opening "Lesson In Power", which flexes and spits fire like the most self-aggrandising hip-hop banger, but lyrically, works as a powerful affirmation of faith that sees Hazit as vessel for a higher power, casting out demons and turning 'prostitutes into preachers' through the power of the Almighty.

Whereas many rappers seem cheerful enough to pay lip-service to God while carrying on with all sorts of immoral activities, however, Hazit’s faith clearly infuses his whole worldview. "Mr Hazit" is an earnest hymn of devotion dedicated to the rapper’s wife, while the dreamy "Hello Kideez" marks this rapper as the consummate family man, a warm piece directed towards the children in his life – from his estranged daughter from a previous relationship, to his wife’s son from another lover: 'You are my son, even though I’m not your real dad/ Anything you want in life, I’ll help you get that'.

It’s worth reiterating that all this well-meaning God-talk doesn’t leave Extra Credit feeling emasculated. "Gossip Syndrome" picks off rival MCs atop a production reminiscent of respected underground head Madlib, all smoky chopped-up funk grooves and sped-up vocal snippets, while "After School Special" is a lyrically intelligent hip hop tract that rides a stomping Amen break, explaining the power of learning in militant terms. Songs of praise delivered with brains and power. 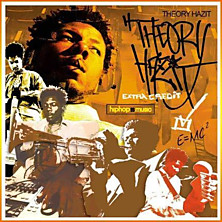