An unprecedented debut which changed the face of hip hop in the 90s.

It’s an uncomfortably common practice in the cult of music critique for writers to overstate the importance of particular albums. Subsequently, long-players by relative makeweights like the Longpigs are talked about amongst scribes of a certain age as lost classics, and the consumer can pick up a deluxe edition of almost any album released prior to 2004, replete with unnecessary ‘bonus’ content that’ll never get played. So allow me to undersell the significance of DJ Shadow’s Endtroducing… LP, the Californian producer’s debut of 1996. It’s alright. It’s got merit. Its influence is definitely noticeable. It can be heard today and sound just as fresh as it did nearly 15 years ago. It did change the face of hip hop, sample culture, and has impressed its presence on next-to-every electronic artist to have dropped a break since its release. Sorry, I tried: like I said, such hyperbole is a mainstay of articles like this.

But in this instance it’s absolutely deserved, as there wasn’t an album released before Endtroducing… that sounded the slightest bit like it. Alright, so actually there were many records issued before its emergence which sounded the slightest bit like it, from a prosaic perspective: as a collection constructed exclusively of samples, obviously clips had surfaced prior to Shadow’s co-opting of them. Among the acts whose material wound up on Endtroducing… are Björk (Possibly Maybe is used on Mutual Slump), Metallica (Orion, on The Number Song), and Marlena Shaw (California Soul, on the wonderful Midnight in a Perfect World). Hip hop had long been scouring record stores for obscurities (and mainstream-successful sorts) to sample – the Beastie Boys’ Dust Brothers-produced Paul’s Boutique is a masterpiece of this art – but never had an artist compiled such a diverse array of lifts in such a fashion that the listener was never once distracted by them. They were only ever absorbed by the album at hand, a standalone work. Endtroducing… remains an incredible achievement where sampling didn’t merely embellish but provide both solid foundations and fantastic frills, core structural elements and orbiting additions.

It’s this bafflingly well-realised approach to Shadow’s arranging – start with a grain of salt-sized snippet of something that appeals, and build an impossibly massive head of steam from it (to appropriate a title from this disc) – that ensures that Endtroducing… hasn’t aged a day. Released at a time when trip-hop was ruling glossy monthlies, via the then-fashionable stable Mo’Wax, it could so easily have collected dust in the fashion of Unkle’s Psysence Fiction (a collaborative affair that Shadow bailed out of after said debut LP); but instead, a play today reveals all the nuances and entrancing passages that hypnotised the listener back when. From the introspective ambience and jazz percussion of What Does Your Soul Look Like Part 1 and the Halloween funk of Organ Donor (brilliantly extended as a B side, and subsequently available on the 1998 compilation Preemptive Strike), to the bombast of The Number Song and the elegiac soul of Midnight in a Perfect World, this is a record that defies shifting trends and neatly sidesteps hindsight’s cruel hand.

With a new Shadow LP on the horizon – The Less You Know, the Better is out in September 2011 – the time is perfect for newcomers to the man’s signature mix of well-chosen samples and singular beat-craft to check out this phenomenal debut. And yes, there’s a deluxe edition available out there. 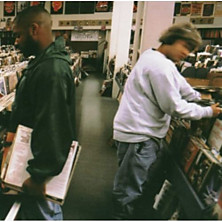