'Just Because' comes at you like a dazzling, rocking freight train grinning from...

At last the legendary space-funk-rockers Jane's Addiction return. It's been thirteen years since their last all-new release, but you'll be glad to hear they're sounding as lean and mean as ever. For lesser bands this might be a mere reformation. For Jane's Addiction it's nothing less than a second coming.

But now they're back to rearrange the mindchops of a whole new generation of corruptable youth, with Chris Chaney replacing Eric A on bass and producer Bob Ezrin at the knobs. Strays is a stupendous beauty, every track is an utter gem.

"True Nature" opens festivities with a visceral blast of thunderous guitar and bass so low-down dirty it'd put Max Clifford to shame. It's a huge jetfighter of a song. The next song and title track kicks off in a swirling haze of gently picked echo-laden guitar at times reminiscent of early Verve. Then the first single "Just Because" comes at you like a dazzling, rocking freight train grinning from piston to piston.

Next we're treated to lush acoustic guitar reminiscent of Ritual De Lo Habitual's "Classic Girl", the first movement of the huge, sprawling, stupendously unpredictable blast that is "Price I Pay". Two drunken, funky songs follow; "Wrong Girl" & "Suffer Some". They will surely compete to be the next single. Final track "To Match The Sun" simply shimmers with an epic intensity.

To say that there's nothing here to match Ritual De Lo Habitual would be to miss the point entirely. Jane's Addiction have never been constrained by the need to repeat themselves just to please less adventurous of critics.

On Strays Jane's Addiction really do sound like a band enjoying themselves again, doing whatever the hell they like, on their terms, and making some of the most exciting music around today. Normal service resumed then. Jane's Addiction are most definitely back. If you know what's good for you you'll run out and buy yourself a modern masterpiece right now. And one for your mum. 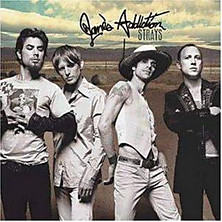