Exerts a deliciously morbid pull on the imagination and the emotions

News that Brett and Rennie Sparks – better known as The Handsome Family –– were to mark their 20th anniversary together as husband and wife with an album of love songs raised eyebrows rather than expectations. Was celebratory love a suitable subject for the dour, gothically inclined couple once memorably described as ''the Gomez and Morticia Adams of country music''?

Well, apparently it was. Although the dozen songs that make up Honey Moon, the couple's ninth album together, are far from what you might expect of billet doux. Peppered with jolts of danger and hints of regret, their dark-hued lyricism revels in the kind of mysterious, immersive intrigue that corkscrews its way through affairs of the heart when opposites attract and Cupid comes calling.

Until now, the flame that has burned for the Sparks has been dark and chill, the sensibility owing more to the slicing blue heat of an oxyacetylene torch than to the cosseting warmth of scented candles. But while Honey Moon finds The Handsome Family broadening its definition of romance and the romantic to accommodate a lighter tone and more filigree textures, you'll be relieved to know that troublesome undercurrents continue to tug at and tear the surface.

Happily (as it were) melancholy still seeps from every musical pore, rococo imagery still saturates every lyric, cryptic allusions and direct references to the world as observed by the Sparks remain deliciously imagistic and weird. The Dixie Chicks this ain't!

There's a burnt beauty to Honey Moon – something akin to Mark Twain re-written by Edgar Allan Poe – that exerts a deliciously morbid pull on the imagination and the emotions. Satisfaction is guaranteed. 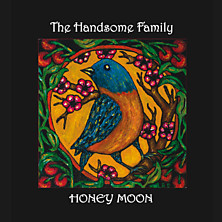