Hits like a spring-mounted boxing glove to your peripheral vision.

“Love’s all around, yeah, but I don’t want none / Give me that nonsense sound and I’ll be back,” sang Mica Levi on her debut with The Shapes back in 2009, marking the arrival of an absurdist talent. Her confounding otherness shows no signs of abating on this second LP.

Among other strings to her bow – she recorded an album, Chopped & Screwed, with the London Sinfonietta last year – London-based Levi is perhaps the only pop star to claim playing the vacuum cleaner as one of her accomplishments. Sure enough, said appliance features in opening track Easy – although the effect is more like being stuck inside a washing machine.

If that sounds like your cup of tea, there’s plenty to enjoy here. Waste pairs skiffly acoustic guitar with stroppy bursts of noise and dubbed-out vocals. The strung-out Heaven sounds like no-one’s idea of its title, except perhaps Mica’s own.

At this point we need hardly add that The Shapes’ MO is something of an acquired taste. Their avant-garde sensibility is paired with an apparently punk-inspired, throwaway presentational style – five of these 14 tracks clock in at under two minutes – that will infuriate some.

But order from chaos is the thing, and when Mica whips her arsenal of whirrs and scrapes into twisted approximations of pop songs, the results are pretty wild. Holiday, for example, is a woozy, melodic gem seemingly relayed through a tin can telephone.

OK sounds like Gary Numan on the verge of a whitey. “Are you sure you’re OK?” asks bandmate Raisa Khan on the track. “Couldn’t be better,” slurs Mica, before Raisa replies, “If you’re not, you should say.” Perhaps you had to be there.

Nothing’s relatively unmessed-with doo wop provides the album’s sweetest moment, before Nowhere’s frantic kiss-off shoves us out the door before we’ve even had chance to suss what the hell’s going on.

Whether or not Never is a record you’ll want to revisit that often is a moot point, but its ability to hit like a spring-mounted boxing glove to your peripheral vision is hardly in doubt. File under ‘WTF’. 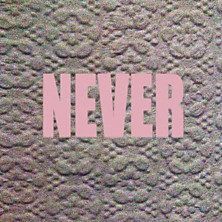