Kristi Stassinopoulou The Secrets Of The Rocks Review

'This album is a fine showcase for her gorgeous voice: pure, rich and at the same...

Greek singer Kristi Stassinopoulou grew up in the southern part of Greece where her musical diet consisted of whatever her brother could find on his beloved homemade radios. Crackly sounds from North Africa and right across the Mediterranean eventually mixed with Velvet Underground, Patti Smith, Byzantine church music, and classical singing; traditional Greek songs too. And, to cap it all, she sang in the Eurovision song contest back in 1983!

For the last few months she's been a darling of the World Music charts with her CD The "Secrets of the Rocks". If you haven't yet heard her voice, close your eyes and imagine what it might sound like...And then carry on imagining because I don't think that Kristi's reached her potential yet. This album is a fine showcase for her gorgeous voice: pure, rich and at the same time, haunting, energising and seductive, but already I'm imagining what she might be doing in ten years time.

Don't get me wrong, this is one of the strongest world music albums around, and if I simply describe it as an album inspired by the sounds of the Greek islands and the ocean, infused with a mixture of traditional instruments (saz, bagpipes, flutes and accordion), with beats and electronica (oh, and waves crashing against the shore), please don't run a mile! Maybe it's because I've just done four summer festivals in a row and I can only hear music while sitting on the grass underneath blue skies that I think this is the perfect outdoor CD.

This is a singer, with her band, performing for large crowds. But Kristi has a superb intimacy in her voice which the production on the album captures extremely well. You can almost hear the crowd singing along in 'Strong Winds Blockade', yet in 'Close My Eyes' she's singing for one person alone. I like the straining of the upper registers of her voice in 'Patithraki' (a rock ledge in the sea you can stand on, apparently) along with the more pulsing rhythms of a typical Northern European idiom.

Someone please tell the band that it's ok to allow more silence and space into the music, give me a chance to hear Kristi do a gentle acoustic set, and then I'll love her music even more. 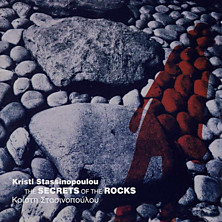