As legend has it, iconic trumpeter Miles Davis had grown tired of contemporary jazz rhythms by the late-60s. Instead, the raspy revolutionary was in search of a more visceral sound, something that transcended the constraints of traditional suit-and-tie bebop and drifted into more electronic musical genres. The results were remarkable: the groundbreaking 'In a Silent Way' and 'Bitches Brew' albums forever changed the course of jazz, making it acceptable for its musicians to live outside the artistic box.

Forty years later, pianist Robert Glasper lives within the same rarefied air, as a musician rooted in traditional jazz standards and brazen enough to push the limits of his sound, no matter how peculiar the outcome. "When people think of jazz musicians, they pigeonhole us as ‘just jazz musicians’," Glasper says on his new album, Black Radio. "Cats started playing for other musicians and tried to be this one thing."

Simply put: Black Radio isn’t just ‘one thing’. Rather, the Houston native’s latest continues on the same path as 2009’s Double Booked: it’s a dynamic recording of aerial soul compositions and unorthodox alternative rhythms, resulting in an effervescent glimpse into modern day jazz/rock fusion. But unlike Miles, whose uncompromised aesthetic delved heavily into expansive funk patterns, Glasper contends with contemporary RnB, building upon its stilted foundation with prominent backbeats and gentle keys, wrapping warped synths around more orthodox instrumentals. At times this music carries the same muffled grittiness as golden-age hip hop, even if the mood is oceanic and free wielding.

When he’s not setting his own course, Glasper gives exciting new life to the obscure and historically bizarre – Letter to Hermoine, featuring vocalist Bilal, remodels the David Bowie ballad with marching drums and rolling piano chords. The album’s epic closer, Smells Like Teen Spirit, is just as odd as the Nirvana original, except the incoherent lyrics are filtered through a Vocoder. While the song opens as a quiet ode to the Seattle grunge band, it eventually dissolves into a distorted cacophony of echoed moans, muddy percussion and cosmic squeaks. In other moments, Glasper slows the pace with a screeching halt, and the results are equally remarkable. Consequence of Jealousy, with its ambient wails and erratic crashes wafting throughout the melody, is given romantic life by Meshell Ndegeocello’s sultry sighs of devotion. "I’m not perfect," she sings, "but my aim is true."

Overall, Black Radio surpasses the excellence of Double Booked, which is a brilliant album in its own right. But while said previous recording was a segregated look into Glasper’s conventional and outlandish affinities, Black Radio blends those ideals into one coherent set. While Glasper isn’t quite an icon, he certainly studies the book of Miles. 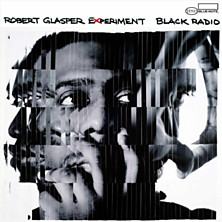